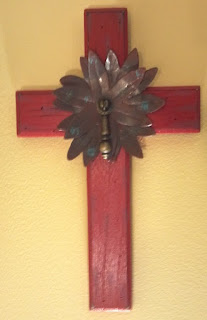 It has been almost a week since my return from Oklahoma City. I hit the ground running when I got back. Catching up on work has kept me from updating this blog. Until now.

In the comments to this post, Victoria Gaile was nice enough to ask for "a summary 'now that I'm home, here's what I thought' post." So, here goes. Victoria, this one's for you.

I spent four pleasant and harmonious days among Christians, some of whom I have deep and substantial disagreements with on matters of doctrine. The ordination of women, homosexuality, the meaning of the Sacraments, the interpretation of Scripture, and so on and on. These are real issues that divide us which cannot be, and were not, ignored.

So often my encounters with fellow Christians are unpleasant. The NWCU was not.

I scribbled lots of notes during the Workshop. Among them is a question that occurred to me: "Do all Christians have a vision of Christian unity?" I think that the answer must be "Yes." For some Christians unity would mean that all believers march in lockstep with their particular brand of doctrinal orthodoxy. As if doctrinal orthodoxy is what saves us.

Doctrine is important, of course, but to insist that others adopt our doctrine is fundamentally unloving. Love, I believe, is the ultimate orthodoxy.

An analogy: my brother and I had different relationships with our father. Why would I expect all Christians to have precisely the same relationship to God in Christ as my own?

It is unrealistic to expect that all Christians will have precisely the same doctrine. The New Testament reveals that the early Church was not of one mind in all matters. New Testament orthodoxy is large enough to encompass both Paul's Gentile Christianity and the Jewish Christianity of James. The New Testament contains both Matthew and Luke. Their unity, finally, is not in doctrinal conformity, but in the cross of Christ.

Divisions in the body of Christ are real, but the National Workshop on Christian Unity shows that Christians of various denominations can live together in harmony and work together in cooperation.  We do not need to be in full agreement. We need only be respectful, kind, forgiving, and charitable.

It's a pity that so many of us find that so difficult.

Illustrating this post is a photograph of the cross that I bought in an Oklahoma City gift shop.