Rachel Is Weeping For Her Children 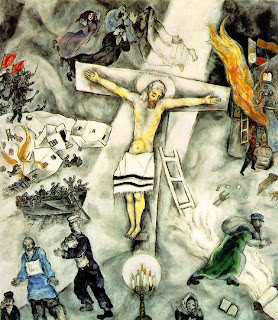 The third and last of our depictions of the crucifixion of Jesus from the Art Institute of Chicago is a 60-3/4 x 55 inch oil on canvas painting by Marc Chagall, The White Crucifixion. This painting is notable for jewel-like colors which were so much a hallmark of Chagall’s style.

A Russian-born citizen of France, Chagall was the 20th century’s premiere Jewish artist. His works are filled with Jewish themes and symbolism.

It is perhaps surprising that Chagall would paint a crucifixion, though he depicted the scene several times. It is not surprising that his Jesus is thoroughly Jewish. His head is covered, as is required of observant male Jews. The traditional loincloth protecting Jesus’ modesty is, in this painting, a prayer shawl.

Above Jesus’ head is the inscription INRI. An artists’ convention, the letters abbreviate the Latin phrase Iesous Nazarenus, Rex Iudorum (Jesus of Nazereth, King of the Jews). Just below that the same phrase is written out fully in Hebrew. I take the inscription to be unironic. Chagall intends this Jesus to be the arch-exemplar of Jewish identity.

Arranged around the cross are scenes of 20th century persecution of Jews. A Russian shtetl is overturned and burning. Refugees languish in an overcrowded boat. A brown-shirted Nazi loots a burning temple. At the foot of the cross are figures fleeing violence: A woman clutches an infant. A man cradles a Torah scroll. A man with a placard hung around his neck gestures in confusion and despair. A figure in a green coat, carrying his possessions in a sack, runs toward the viewers’ right. This last figure is seen in many of Chagall’s works. Some say that he represents the prophet Elijah, others the Wandering Jew. Chagall’s symbols are often ambiguous or multivalent.

Floating above the cross, looking on in horrified sorrow, is a quartet of heavenly witnesses. The men may be the Patriarchs: Abraham, Isaac, and Jacob. The woman might represent Rachel, the mother of Jacob, and figuratively, of all the Jewish people.

Thus says the Lord:
A voice is heard in Ramah,
lamentation and bitter weeping.
Rachel is weeping for her children;
she refuses to be comforted
for her children,
because they are no more.
(Jeremiah 31:15)


A shaft of light falls upon the cross. In Christian iconography this might represent redemption, but this is not a Christian painting. There is nothing redemptive in all this suffering. The radiance is rather a heavenly spotlight shining upon what has been done to Jesus and to all the Jewish people.

Painted in 1938, the White Crucifixion was Chagall’s reaction to the atrocities being committed against his people. As a Christian, I see in this painting a call to repentance for the way that my faith has contributed to violence against God’s chosen people; a challenge to stand up for those who are persecuted; and a reminder that the crucified Jesus suffers with all who suffer.

Today is Good Friday. In church we will pray for “the Jewish people, the first to hear the word of God.” We will say: “Almighty and eternal God, long ago you gave your promise to Abraham and your teaching to Moses. Hear our prayers that the people you called and elected as your own may receive the fulfillment of the covenant’s promises.”

Today is also the first day of Passover. I wish my Jewish friends a glad and blessed Pesach.