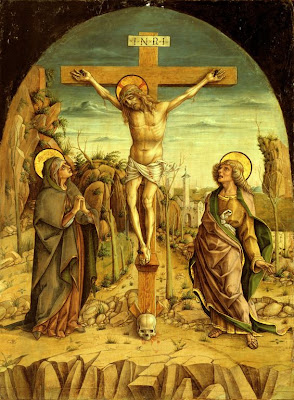 The Art Institute of Chicago is one of my favorite places in all the world. It houses a remarkable collection of art treasures ranging from the ancient to the postmodern. For this Holy Week, I would like to share my reflections on three images of Jesus crucifixion from that collection.

First is a work by 15th century Italian artist Carlo Crivelli. Measuring 29-1/2 x 21-3/4 inches, it is not a large work. Painted in tempera on wood, the scene has a golden quality. The setting is a barren and fantastic landscape. In the near distance is the city of Jerusalem.

The cross, is front and center. Christ, dead or nearly so, wears his crown of thorns. The artist has wrapped him in a traditional loincloth. This bit of modesty was probably not afforded to the actual victims of crucifixion.

Flanking the cross are Mary, the mother of Jesus, clothed in her traditional blue-and-rose robes, and St. John, the son of Zebedee, their faces etched with grief. There is a long standing assumption that “the disciple whom Jesus loved” mentioned in the Fourth Gospel was this John. He is depicted here as a beardless youth. Tradition has it that John was the youngest of Jesus’ twelve disciples, and the only one to live into old age, the rest (excepting Judas, of course) all dying as martyrs.

In the Gospel of John 19:26-27, we read that Jesus, seeing his mother and the beloved disciple from the cross, said, first to Mary, “Woman, here is your son.”

Then he said to the disciple, “Here is your mother.” And from that hour the disciple took her into his own home.


At the foot of the cross, a new community was formed, a fictive kin group, a family based not on blood relationships but on loyalty to Jesus.

A curious detail in this painting is a human skull at the base of the cross. The hill on which Jesus was crucified was called “Golgotha,” an Aramaic word meaning “the place of a skull.” This point is mentioned in all four Gospels.

A legend has it that the skull was that of Adam, the father of all humankind. The sin of Adam and Eve infects all of humanity. The cross of Jesus is God’s remedy for our sinfulness.

As the blood of Christ runs down the cross, it washes over Adam’s skull, symbolically baptizing him, and by extension, all of his children. The cross of Jesus is meant for the salvation of all people.
Posted by Brant Clements at 8:58 PM