The Authority of Scripture

THE BIBLE DID NOT DESCEND FROM HEAVEN ON A GOLDEN CHAIN

The many and various books of the Bible were written, redacted and collected over a long period of centuries. The Bible is not the product of a single author, but was written by many individuals, some of them anonymous. The canon of the Bible was not decided by a formal process, but came about by consensus and common usage.

Let’s face it, the Qur’an and the Book of Mormon have better origin stories.

Some Christians claim that the authority of the Bible is proven by its inerrancy. They say that the Bible contains no errors or contradictions. I find this idea untenable. The notion of inerrancy requires too much denial of fact, too many mental gymnastics for me to find convincing. 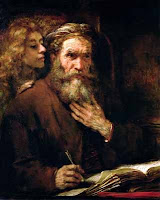 Some Christians claim that the authority of Scripture derives from its divine origin. Among these, some say that God dictated the Bible. If this is the case, God would have benefited from the services of a fact-checker. Others say that God used ghostwriters (that is, God told the scribes what to write but allowed them to use their own words, which God then approved). Surely God could have found a better ghostwriter than John of Patmos, whose command of Greek grammar was tenuous at best.

There are passages, especially in the prophetic writings, that claim to be direct words from God. Overall, though, the Bible makes no such claim for itself. It seems to me that most theories of direct inspiration overlook the fact that large portions of the Scriptures are words directed from humans to God (the book of Psalms, for instance) and not the other way around.

So on what can we base the authority of Scripture? How can we claim it as the ”word of God” and the sole “source and norm” of the Church’s doctrine? I would suggest that the Bible’s authority is three-fold.

First, it is the Church’s book. The Bible is that collection of writings that the Church found useful, beneficial, inspired and inspiring.

Second, the Bible has stood the test of time. The books that the Church recognizes as authoritative have been proven through centuries and millennia of use.

Third, the Bible is self-authenticating. In reading, contemplating and conversing with the Scriptures, people encounter God.

The image of Rembrandt's painting of St. Matthew and the Angel was copied from this website. I have no affiliation with Fine Art Prints on Demand and cannot vouch for their services.
Posted by Brant Clements at 6:53 PM