WHAT WAS PAUL THINKING?

Some commentators suggest that, because 1 Corinthians 6:9 is the earliest known use of arsenokoitai, Paul minted the word. Color me skeptical. 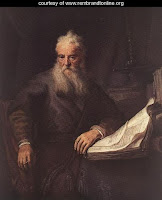 I assume that when the Apostle Paul wrote to the Corinthians, he wanted to be understood by them. Including a newly coined word in list of those who “will not inherit the kingdom” is a poor way to be understood. It seems to me much more likely that Paul would use a word that he thought was in the Corinthians’ vocabulary. Probably the word arsenokoitai was in common, if infrequent, use.


And he who lies with a male in a bed for a woman, both have committed an abomination; by death let them be put to death; they are liable.

It reads a little better in the Greek. Trust me. At any rate, the components of the word arsenokoitai, arsenos (“male”) and koiten (“bed”), occur together in this verse. Still it is highly conjectural to think that Paul had this verse in mind when he wrote 1 Corinthians 6:9. Again, assuming that Paul wanted the Corinthians to understand him, we would need some reason to think that the Corinthians, a Gentile congregation, would know this verse from Leviticus. It’s not impossible, of course, but it assumes a lot.

The fact is, we cannot know exactly what Paul was thinking when he used the word arsenokoitai. He apparently had something specific in mind, but it is beyond our ability to know just what that was. The variety of ways that English translations handle the word demonstrate this.

There are some things we can be sure Paul did not mean by arsenokoitai. He did not mean “homosexuals” that is, “people who have a same-sex attraction.” The concept of homosexuality did not exist in Paul’s day. Neither did he mean persons living in a committed, covenanted, publicly accountable same-sex relationship (“gay marriage”). That, too, is a new concept.

This does not, however, mean that Paul would have approved of gay marriage. The truth is, he saw even straight marriage as a compromise for those who could not live in celibacy.

It would be nice to think that, if Paul knew what we know about homosexuality, he would have given the thumbs up to life-long, committed, publicly accountable same-sex relationships. Unfortunately, we cannot know what Paul would think.


For this post I cribbed another cool image of the Apostle Paul from http://www.rembrandtonline.org/

Posted by Brant Clements at 7:01 PM