…OR, WHY I AM NOT AN INERRANTIST 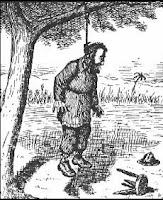 I think I was a sophomore in high school when I realized that the New Testament contains two divergent accounts of the death of Judas, the disciple who betrayed Jesus.

In Matthew 27:3-10 we read that Judas, filled with remorse, tried to return the money he had been paid to betray Jesus. The priests who had paid him were unsympathetic. So, Judas threw the money down in the temple. Then he went and hanged himself. The priests, unwilling put the blood money into the temple treasury, used it to buy a potter’s field, a place to bury foreigners. The field was then called Hakeldama, the “field of blood.”

The book of Acts, written by the author of the Gospel of Luke, tells a story that is similar, but different in a few key details. In Acts 1:15-20, we are told that Judas took his reward for betraying Jesus and spent it on a field. He then fell “headlong” and “burst open in the middle so that all of his bowels gushed out.” For this reason the field was called Hakeldama.

To summarize, Matthew and Luke differ on the details of who bought the field, how the field got its name, and how Judas died. When I discovered this, it made me wonder. Just how did Judas die?

At the time, I occasionally tuned into a radio station associated with a large Bible college. They had a “Bible Answers” type of program. So I called in and posed my question. The host explained that the two accounts can be harmonized. Judas, he said, hanged himself. After he had hung for a while, he swelled up like a dead raccoon on a hot day. Either the rope or Judas’s neck broke. His corpse fell and burst.

I have since found that this, with small variations, is a pretty standard explanation employed by inerrantists. By “inerrantist” I mean someone who holds that the Bible contains no errors or contradictions. The problem is, it did not add up for me then, and it still doesn’t now.

It violates the plain sense of Scripture. 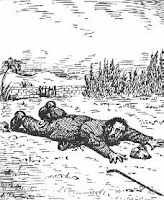 This forces the question, if the Bible contains errors and contradictions, if its writers hold diverse theologies, can it still be considered authoritative? Can the Bible still be the sole source and norm of the Church’s teaching?


I don't know the original source for the pictures attached to this post. I found them via Google image search and liberated them from this blog.
Posted by Brant Clements at 12:57 PM