Until the sixteenth century, the prevailing view of the universe held that the sun revolved around the earth. This is clearly the cosmology held by the writers of the Bible. In 1543, the year of his death, a Polish mathematician and astronomer named Nicolaus Copernicus published his theory that the earth, in fact, revolved around the sun.

There was mention of a certain astrologer who wanted to prove that the earth moves and not the sky, the sun, and the moon. This would be as if somebody were riding on a cart or in a ship and imagined that he was standing still while the earth and the trees were moving. [Luther remarked] “So it goes now. Whoever wants to be clever must agree with nothing that others esteem. He must do something of his own. This is what that fellow does who wishes to turn the whole of astronomy upside down. Even in these things that are thrown into disorder I believe the Holy Scriptures, for Joshua commanded the sun to stand still and not the earth.” Source.

Other accounts of the conversation have Luther branding Copernicus as an “upstart” and a “fool.” Unfortunately for Luther, Copernicus was right. 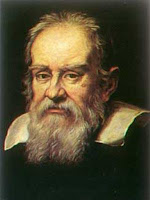 It was almost 100 years later that an Italian astronomer named Galileo Galilei, with the aid of his telescope, proved Copernicus’s theory by empirical observation. When he published his findings in 1632, Galileo was found to be “vehemently suspected of heresy.” He was imprisoned by the Inquisition, and made to “abjure, curse and detest” his findings. He remained under house arrest until his death at age 77 in 1642.

In 1992, Pope John Paul II acknowledged the errors that the Church tribunal made in the trial of Galileo. Source.

Luther and the seventeenth century Roman Catholic Church were not the only ones to mistakenly condemn Copernicus and Galileo. I present them here as typical of what happens when the content of the special revelation is mistaken for the general revelation.

In my next post, I will explain what I mean by special and general Revelation.


The image of Galileo is, to the best of my knowledge, in the public domain.
Posted by Brant Clements at 6:58 PM