There is a vice list in 1 Corinthians 6:8b-10, a list of several types of people who will not “inherit the kingdom of God.” The Apostle Paul uses a weird word in the original Greek of this passage. I quote it here from the King James Version of the Bible, emphasizing the phrase used to translate Paul’s unusual word. I am using the KJV intentionally because it was made before the word “homosexual” came into use.

Paul’s unusual Greek word was arsenokoitai. It is a plural compound noun made from the words arsen which means “male” and koitai meaning “beds.” What makes it strange is that 1 Corinthians 6:9 is the earliest known use of this word. The same word occurs in a vice list of those who are “under the law” in 1 Timothy 1:10. This is its only other use in the New Testament and is most likely derived from its earlier use in 1 Corinthians. 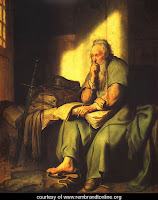 A word’s meaning is not determined by its etymology. In English, we can understand a thing without actually standing under it. Knowing that arsenokoitai is literally “male-beds” obviously does not define the word. Meaning is derived from context and usage. Since 1 Corinthians 6:9 is the first known use of arsenokoitai context becomes key. From the context of the New Testament vice lists, it is safe to say that being one of the arseonkoitai is not a good thing. Saying exactly who the arsenokoitai are is more difficult.

In my next post, I’ll look at the ways various English translations have treated the word. I should point out first that some translators couple the word arsenokoitai with the word preceding it, which the KJV translated as “effeminate.” That word (which does not occur in the 1 Timothy vice list) is malakoi, a plural noun that could be translated literally as “softs.” In New Testament era Greek it had a range of meaning that spanned from “cowards” to “catamites” and “cross-dressers.” It occurs to me that the derogatory English word "sissy" carries much the same range of meaning.


The picture of St. Paul in prison was taken from http://www.rembrandtonline.org/. Cool website!
Posted by Brant Clements at 2:36 PM