The Apostle Paul is Pulling Your Rug

THOU ART THE MAN 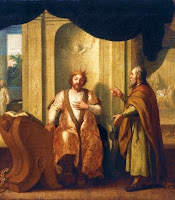 Pulling the rug out from under your audience can be a powerful rhetorical strategy. First you raise their outrage against a common foe. Then, with a great “Aha!” you show them that they are that foe.

When King David seduced another man’s wife, and then arranged for that man to be killed in battle, he was confronted by the prophet Nathan, who told him the sad story of a poor man. This man’s pet lamb, Nathan said, was stolen and slaughtered by a wealthy man in spite of the fact that the wealthy man had many flocks of his own. The King, outraged, declared the wrongdoer worthy of death. Then Nathan pulled the rug out from under him. “Thou art the man,” he said in good King James English. You can read all about it in 2 Samuel 12.

Martin Luther also engaged in a little rug-pulling in a masterful Christmas sermon. He described the sad plight of the holy family who were cruelly turned away from the crowded inn so that Mary had to give birth to Jesus in a stable. Of course, he said, no one in his congregation would be so cold-hearted. Surely they would provide warmth and shelter for the newborn Savior. Then Luther accused them of hypocrisy for ignoring the needs of the poor, hungry and cold in their own midst.

In the first chapters of his letter to the Romans, the Apostle Paul used the same rhetorical strategy. First he engaged the Roman Christians’ outrage against the depravities of the pagans. God’s wrath burned against them because they worshipped idols! (Rom. 1:22-25). They were God-forsaken, engaging in depraved sex acts! (Rom. 1:26-27) And therefore…

Rug-pulling is a powerful rhetorical strategy, but it is also a dangerous one. Like sarcasm, the one using this rug-pulling technique runs the risk that their audience just will not get it. Maybe they will tune out before they hear the point. Maybe someone will come along later and undermine the point by inserting a chapter break in the text just before the rug gets pulled.

I have said it before and I will say it again. Anyone who uses Romans 1:18 ff. as a blanket condemnation of homosexuals has not read as far as Romans 2:1.

Thou art the man.

I snagged Matthias Scheits' painting of David and Nathan from wikipedia.
Posted by Brant Clements at 2:35 PM