...IN THE WRITINGS OF ST. PAUL 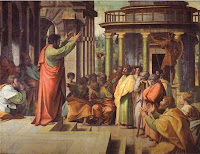 It was during the period of debate, discussion and study leading up to last summer’s Churchwide Assembly that I had a conversation with a pastor who belonged to one of the more conservative Lutheran church bodies. He said, “How can the ELCA even think about approving of homosexual relations when the Scriptures are so clear?” I told him, “Assuming that your question is sincere, I’ll answer it. But first let me ask you a question. Do the women in your congregation cover their heads when they pray?”

He knew what I was referring to. In 1 Corinthians 11, the Apostle Paul takes up the question of head coverings. Men, he says, should pray with their heads bare, but women should cover their heads.

“Don’t be silly,” he said. “Paul was referring to a cultural custom. Besides, it was just one point in a larger argument.”

I said, “Exactly. And that’s how the ELCA can consider approving of same-sex relations. Paul’s references to homosexual acts were culturally conditioned. In our culture we understand homosexuality differently than he did. What’s more, in Romans 1 Paul mentions homosexual acts among the Gentiles as one point in a larger argument.”

Anyone who uses Romans 1:26-27 as a blanket condemnation of homosexuals apparently has not read as far as Romans 2:1.

Paul’s point is not that homosexuals are sinners, but that everyone is a sinner, since “all have sinned and fall short of the glory of God….” (Romans 3:23)