The Truth about Adam and Eve 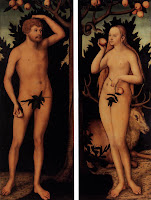 
In short, the story goes like this: God made a human being (“adam” in Hebrew means “human” or “humankind”) from the dust of the ground and placed him in a paradisiacal garden called Eden. There was only one rule in Eden: Do not eat from “the tree of the knowledge of good and evil…for in the day that you eat of it, you shall die.” God, noting that it was not good for the human being to be alone, made all of the creatures of earth and sky. God brought them to Adam, who gave names to each one. None of them, however, was a fit companion for the human being. So, God caused Adam to sleep, and taking one of his bones, possibly a rib, fashioned a woman from it. Upon awakening, a delighted Adam called her “bone of my bones, and flesh of my flesh.” The author inserts a note that “for this reason a man leaves his father and mother and clings to his wife, and they become one flesh.” Adam also called his new partner “woman,” and later named her “Eve” (Hebrew for “life-giver”). They lived, for a while, naked and innocent in Eden.

A talking snake entered the scene and, promising Eve that she would not die but rather become “like God,” convinced her to eat the fruit from the forbidden tree. She and Adam ate and realized that they were naked. They covered themselves with fig leaves and tried to hide from God. When God, rather anthropomorphically, took a stroll in the garden, he found and confronted the human pair. Adam blamed Eve. Eve blamed the snake. All three of them were cursed. They were thrown out of Eden, and ever since people have toiled to grow crops, women have given birth in pain, and snakes have crawled on their bellies.

Though this ancient story of Adam and Eve is couched in the male-dominant terms of the patriarchal culture in which it originated, it still has a powerful descriptive function. It tells us what our life as humans is like. We are creatures, made by God, and akin to the earth. We long for companionship. It is not good for us to be alone. We are subject to sexual desire, and to mortality.

We are made to live in right relationship to God, nature and one another but our relationships are broken. We live in a state of alienation. We still wish to be our own gods. We desire dominance over one another. We toil for our existence. We long for an ideal existence that we can imagine but cannot obtain.

These few conclusions do not begin to exhaust the truths about human existence expressed in the story of Adam and Eve. Adam and Eve are us.

Next: Genesis 2 and marriage.


This post’s image of Adam and Eve was painted by Lucas Cranach the Younger. I found it here. For a scholarly take on Adam’s “rib” bone couched in sophomoric humor, read chapter one of The Uncensored Bible: The Bawdy and Naughty Bits of the Good Book, by John Kaltner, Steven Mckenzie and Joel Kilpatrick, HarperOne, 2008. If you don’t find low humor amusing, skip it. What can I say? I tickled me.
Posted by Brant Clements at 2:29 PM

Email ThisBlogThis!Share to TwitterShare to FacebookShare to Pinterest
Labels: Genesis 2