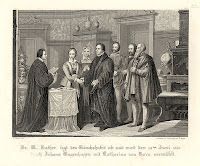 The Two Kingdoms doctrine is a standard trope in Lutheran theology. Essentially it says that God works in this world through two distinct spheres. The Kingdom of God’s right hand is the Church where the Word is preached and the Sacraments administered. The Kingdom of God’s left hand consists of the civil authorities that exist to promote peace, reward good and punish wrongdoing.

These two kingdoms are distinct, but God is at work in both of them. God has given them both for the benefit of humankind.

Luther’s reforms included a reduction in the number of Sacraments from seven to two. Baptism and Holy Communion, both commanded by the Lord Jesus, were retained. Confirmation, ordination, last rites, confession, and marriage were not considered Sacraments because Jesus did not command them. Effectively this made marriage, for Lutherans, a part of the Kingdom of God’s left hand.

Marriage is regulated by the State, not the Church. This makes sense because the institution of marriage exists also in non-Christian cultures. Marriage benefits society by promoting order, ensuring inheritances and property rights, providing stability for families and so on. Marriage is good. Marriage is God-given. Marriage may be blessed by God’s right hand, but it is given from God’s left hand.

In my last post, I linked to Ted Olson’s article providing a politically conservative rationale for same-sex marriage. I would argue that a political rationale is a theological rationale. The State is free to regulate marriage as it sees fit. Whether the Church chooses to bless a marriage is another question.

Next: some thoughts on marriage in the Bible.


The illustration of Martin and Katie's wedding came from the ELCA website. Please pray for the people of Haiti, and if you are able, give to their relief. Give through any reputable charity of your choice. ELCA Disaster Response is my choice.
Posted by Brant Clements at 9:10 PM