This morning I unwrapped my present: a copy of the Jerusalem Bible, Reader's Edition with illustrations by Salvador Dali. The English language Jerusalem Bible was published in 1966 and based on an earlier French Translation. It was updated, with closer attention to the original languages, as the New Jerusalem Bible in 1985. Both editions are readable translations with good literary quality. Fun fact: J.R.R. Tolkien was the translator of the book of Jonah for the 1966 edition.

The Jerusalem Bible with Dali illustrations was published in 1970 and has long been out of print. It is a large, heavy book (think pulpit Bible) with gilt edges and sewn in ribbon markers. The copy I was given is in its original box. The box is a little rough. A previous owner wrote his name inside the front cover. There are a few light pencil markings in the Song of Songs. I am happy with the condition of the book. I am delighted with the gift. It is, in fact, just what I wanted.

I'm a fan of Salvador Dali. He was great technician and an imaginative artist. Part of his genius was a talent for self-promotion. At its worst, Dali's work was calculated and commercial. At its best, it was brilliant. Some of his work was beautiful, some humorous, some repulsive. It was never dull.

The illustrations in my Bible are dated 1964-5. They appear to have been done in watercolor and are more abstract than Dali's oil paintings. Many have the same sketchy quality of his pen-and-ink drawings.

For Christmas, here is Dali's illustration of the nativity. Though abstracted and surreal, it incorporates elements of traditional iconography: e.g. the figures poses, the virgin's blue cloak, the halos, and the Christ child's cross. 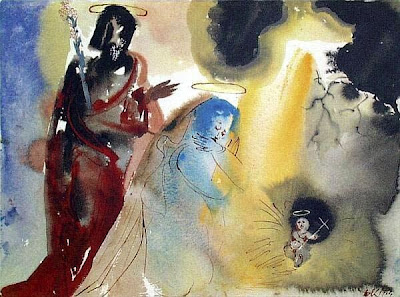 Just for fun, here's Dali's illustration of the tower of Babel. I love the Dali-esque touches: the decay and the crutches propping up the structure. 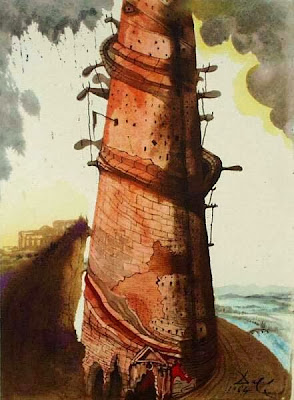 Merry Christmas to you, dear reader. Click the pictures to enlarge. I found the Nativity here and the Tower of Babel here.