THE YEAR OF BLOGGING BIBLICALLY: DAY 197 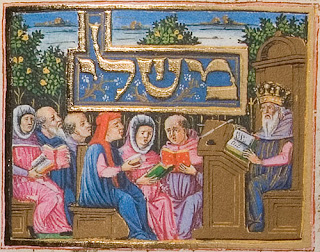 The second collection of material in Proverbs is, like the first, attributed to Solomon. Where the first collection (chapters 1-9) was made up mostly of poems praising wisdom and contrasting it to folly, this second (chapters 10-22:16) collection consists almost entirely of short wise sayings organized according to no principle I can discern.


Many of these proverbs are two line sayings that make a simple contrast between something wise and something foolish.


Not all of the proverbs fit this pattern.

The blessing of the LORD brings wealth,
without painful toil for it. (Proverbs 10:22)


Overall, the proverbs in this section extol the value of hard work, honesty, integrity, humility, prudent speech, kindness, generosity, and even kindness to animals.

The righteous care for the needs of their animals,
but the kindest acts of the wicked are cruel. (Proverbs 12:10)


The themes of wealth and poverty are treated repeatedly in Proverbs.

The wealth of the rich is their fortified city,
but poverty is the ruin of the poor. (Proverbs 10:15)

Wealth is worthless in the day of wrath,
but righteousness delivers from death. (Proverbs 11:4)


A sidebar in the CEB Study Bible (page 1021, OT) notes that the various Proverbs display differing attitudes toward the rich and poor.

Such sayings reflect the changing nature of human relationships and proverbial wisdom (See Prov. 26:4-5). Is wealth always to be celebrated and poverty criticized? Are some folks poor through no fault of their own? Is a lack of generosity to be praised or criticized? One's place in the journey of life determines the answers to such questions. A single proverb isn't appropriate to every circumstance. According to the book of Proverbs, neither poverty nor wealth is given high status in God's eyes, except as they have to do with one's pursuit of wisdom.


Some of the proverbs do, I think, have universal application. Lazy workers always irritate their employers (Proverbs 10:26). It's never a good idea to secure a stranger's debt (Proverbs 11:15). A friend's, maybe....

Proverbs 11:22 uses a vivid image to make its point.

Like a gold ring in a pig’s snout
is a beautiful woman who shows no discretion.


There is no corresponding saying about good looking but stupid men. Proverbs comes from a patriarchal culture.


I found the picture of Solomon teaching here. Scripture quotes are from the New International Version.