I've been having a lot of fun lately with a book called The Twible by Jana Riess. Riess takes every chapter of the Bible and reduces it to a tweet, 140 characters or less. And, the cover of the book proclaims (with no hyperbole whatever) "...now with 68% more humor."

Since I complained in my last post that I might be getting a little tired of the Psalms, I thought I'd share with you what The Twible does with Psalms 140-145. If you don't mind a little irreverence, this book is a hoot. (Personally, my motto is "Sacrilege Before Sanctimony"). I got my copy through Amazon. For some reason my local independent bookseller wasn't able to get it for me.

To stay within the 140 character limit, Reiss uses quite a few abbreviations. In the following "G" stands for God.

140: Let burning coals rain down on my enemies! May they fall into a ravine! I'd dance a little jig. Just dreaming out loud here.

141: A psalm of David, which is a lot like the other psalms of David. Being king means never having to admit you're redundant.

142: Allegedly David's song when he was hiding in a cave from Saul. He had extra time on his hands to work out all the chords.

144: Life is sweet when our kids grow to adulthood and no one's getting murdered in the town square. It's the little things, really.


A little background before we move on to the last psalm. Psalm 145 is an alphabetic acrostic in Hebrew. Each verse begins with a successive letter of the Hebrew alphabet, but, for reasons unknown, the letter nun is skipped. Whether this was the psalm's original state is an open question. The Greek Septuagint and the Latin Vulgate both supply a missing verse. A version of the Psalm 145 found among the Dead Sea Scrolls also includes a verse which, in Hebrew, begins with nun.

145: In this ABC poem the verse for the letter N was missing until Super Grover from Sesame Street found the Dead Sea Scrolls. 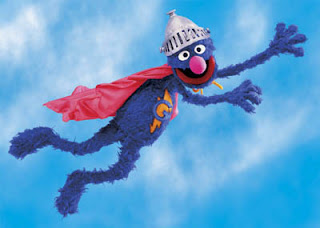 Posted by Brant Clements at 8:44 PM