THE YEAR OF BLOGGING BIBLICALLY: DAY 202

There are seven collections of sayings in the book of Proverbs.

V. More Proverbs of Solomon compiled by the men of Hezekiah, King of Judah

VII. Sayings of King Lemuel which his mother taught him (Proverbs 31:1-31)

Today we read the conclusion of the third collection, all of the fourth, and the beginning of the fifth.

Proverbs 24:1-22 continues in much the same vein as what has come before. The sayings in this section are generally longer than the simple contrasting aphorisms of Collection II. The advice is specifically directed toward young men who seek to advance in the royal court.

Fear the LORD and the king, my son,
and do not join with rebellious officials,
for those two will send sudden destruction on them,
and who knows what calamities they can bring?
(Proverbs 24:21-22)


Proverbs 24:3 should be stitched on a sampler. 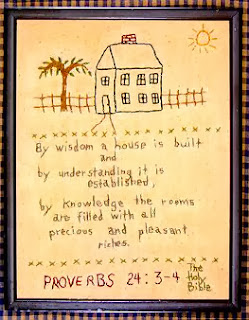 I went past the field of a sluggard,
past the vineyard of someone who has no sense;
thorns had come up everywhere,
the ground was covered with weeds,
and the stone wall was in ruins.
I applied my heart to what I observed
and learned a lesson from what I saw:
A little sleep, a little slumber,
a little folding of the hands to rest—
and poverty will come on you like a thief
and scarcity like an armed man.


In general the Proverbs are against laziness. "Sluggard" is an odd word to find in a modern translation but the NIV uses it frequently.


Chapter 25 begins the section of Solomonic proverbs "collected by the men of Hezekiah." Remember King Hezekiah? He was one of Judah's later kings. In was portrayed as fallible and weak. 2 Chronicles gave an overwhelmingly positive portrait of the man. Both accounts credit him with positive religious reforms in Judah.

In the fifth collection there are more sayings making comparisons and fewer making contrasts than we saw in the previous Solomonic collection (Proverbs 10:1-22:16). Take Proverbs 25:13 for an example:

Like a snow-cooled drink at harvest time
is a trustworthy messenger to the one who sends him.

If you find honey, eat just enough—
too much of it, and you will vomit.
Seldom set foot in your neighbor’s house—
too much of you, and they will hate you.


Good advice to a guest: Don't overstay your welcome. After all:

Guests, like fish, begin to smell after three days.


That last bit is from Benjamin Franklin, not Solomon. Some advice is timeless.

Do not exalt yourself in the king’s presence,
and do not claim a place among his great men;
it is better for him to say to you, “Come up here,”
than for him to humiliate you before his nobles

As a dog returns to its vomit,
so fools repeat their folly.


The contradiction here might be intended, like a Zen koan,  to tease the brains of the readers. Or, they might be meant to be applied in different situations in which case, moral absolutists should take note, we have a biblical instance of situational ethics.


The image of the Sampler came from this website. Scripture quotes are from the New International Version.
Next: Proverbs 27-29
Posted by Brant Clements at 3:07 PM