THE YEAR OF BLOGGGING BIBLICALLY: DAY 204

Today we put a bow on the Book of Proverbs. The last two chapters of this book are also the last two collections of sayings.

Chapter 30 contains the sayings of Agur, son of Jakeh, possibly of Massa. None of those names is otherwise known and, in fact, they may not be proper names at all.

Agur's sayings are of a different character than what has come before. There is a little of the cynicism of Ecclesiastes in them.

Surely I am only a brute, not a man;
I do not have human understanding.
I have not learned wisdom,
nor have I attained to the knowledge of the Holy One.
(Proverbs 30:2-3)


And there is something of Job in Agur's statement of the limits of human wisdom.

Who has gone up to heaven and come down?
Whose hands have gathered up the wind?
Who has wrapped up the waters in a cloak?
Who has established all the ends of the earth?
What is his name, and what is the name of his son?
Surely you know!
(Proverbs 30:4)


Tacked onto the end of Proverbs like an appendix, Agur's sayings may be a critical commentary on the Hebrew wisdom tradition, or a kind of advanced seminar in wisdom.

Chapter 30 is characterized by numeric proverbs which find sometimes surprising connections between 4 otherwise unrelated things. Verses 24-28 have long been among my favorite Proverbs.


In case you wondering about the hyrax, here's a picture of one. 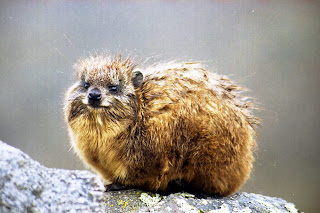 Proverbs 31 consists of the sayings of King Lemuel, who may also have been of Massa and about whom nothing is known.

Actually, these are the sayings of Lemuel's mother who warned her boy against the dangers of "Cigarettes, Whiskey, and Wild, Wild Women." Okay, maybe she didn't mention cigarettes, but she would have if they'd been invented. Besides it gives me an opportunity to insert this video:


Between Lemuel's mother and the description of the Valorous (or Strong, or Virtuous, or Noble, or Whatever) Woman in verses 10-31, chapter 31 of Proverbs belongs to women.

Concerning the woman of verses 10-31, I'll give the first word to Rachel Held Evans:

At my Christian college, guys described their ideal date as a "P31 girl," and young women looking to please them held a "P31 Bible Study" in my dormitory lounge at 11 p.m. on Mondays. She's like the evangelical's Mary--venerated, idealized, glorified to the level of demigoddess, and yet expected to show up in every man's kitchen at dinnertime. Only unlike Mary, there is no indication that the Proverbs 31 woman actually existed....

And yet many Christians interpret this passage prescriptively, as a command to woman rather than an ode to women, with the home-based endeavors of the Proverbs 31 woman cast as the ideal lifestyle for all women of faith.
(from The Year of Biblical Womanhood in the chapter "January")


Making a checklist of womanly virtues from this poem is, to say the least, problematic. Jana Reiss gets the next word:

The "Proverbs 31 woman" has been used through the centuries both to praise women's strength and to keep them in their place, which many biblical interpreters have insisted is the home. But if you read the text more carefully, you can see it is a bit more complicated than that.
(The Twible, p. 148)


As Rachel Held Evans discovers, the use made of the Proverbs 31 woman in her Evangelical Christian context was far from its application among Jews. The Jewish Study Bible notes:

The poem is traditionally recited by Jewish men to their wives on Sabbath evening, before the Kiddush (the sanctification of the Sabbath over wine). It is also often recieted at funerals of women. The poem is an acrostic, with each line beginning with a letter of the Hebrew alphabet in sequence.

Like any good poem, the purpose of this one is to draw attention to the often-overlooked glory of the everyday. The only instructive language it contains is directed toward men, with the admonition that a thankful husband honor ihis wife "for all that her hands have done" (Proverbs 31:31). Old Testament scholar Ellen F. Davis notes that the poem was intended "not to honor one particularly praiseworthy woman, but rather to underscore the central significance of women's skilled work in a household-based economy." She concludes that "it will not do make facile comparisons between the biblical figure and the suburban housewife, or alternately between her and the modern career woman."

Next: Ecclesiastes 1-4
Posted by Brant Clements at 1:14 PM