THE YEAR OF BLOGGING BIBLICALLY: DAY 186

Psalm 109, is also attributed to David. It is the prayer of one who has been falsely accused. Verses 6-19 call down curses on the Psalmist's enemy. My father was a fairly creative curser, but he had nothing on this guy. I particularly like the bit where he says, essentially, "May your orphaned children beg for bread in the streets." Okay, that is a paraphrase. There are several "Psalms of Imprecation" like this one. The sentiments they express may be harsh and ugly, but they are perfectly human. I've said before, I love the psalms because they teach us that we can say anything in prayer.

Psalm 110 is another "Royal Psalm" apparently composed for a king's coronation. It is quoted by Jesus in a dispute with the Pharisees (Matthew 22:44 and parallels), and is cited in other New Testament texts where it is associated with Jesus' kingship. Verse 4 mentions Melchizedek, the mysterious priest of Salem whom we met in Genesis 14:17-20. I take a priest "of the order of Melchizedek" to be a non-levitical priest. In context it seems that the king is being anointed as a priest. In the book of Hebrews, the verse is applied to Jesus.

Psalm 111 is a "Wisdom Psalm" which offers praise for YHWH's saving acts on behalf of Israel. Verse 10 repeats the wisdom motto: "The fear of YHWH is the beginning of wisdom." Commentaries usually explain that "fear" connotes "awe," "respect," and "reverence" more than "abject terror." Martin Luther explained that whatever a person "fears and loves" above all else is that person's god. In his explanations to the 10 Commandments in the Small Catechism, Luther repeatedly says that we are to "fear and love God." It is (most certainly) true that the things we fear have control over us and, in that regard at least, become our gods. "It is," according to Hebrews 10:31, "a fearful thing to fall into the hands of the living God." I suspect that the Psalmist had something like this in mind.

Psalm 112 is another alphabetical acrostic. It is thematically related to Psalm 111 and repeats the wisdom trope: the righteous prosper and the wicked fail.

In Jewish tradition Psalms 113-118 make up the "Egyptian Hallel." These six psalms are read as a part of the Passover seder.

Psalm 113 declares that YHWH, though exalted, cares for the poor and elevates the lowly.

In Psalm 114 creation reacts to YHWH's saving act of bringing Israel out of Egyptian bondage. The waters flee from YHWH. The mountains and hills skip (tremble?) like calves. 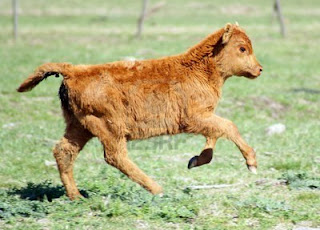 It's hard not to smile at a picture of a skipping calf. I liberated the image from this website. I like the picture but I don't know enough to endorse the site.