THE YEAR OF BLOGGING BIBLICALLY: DAY 174 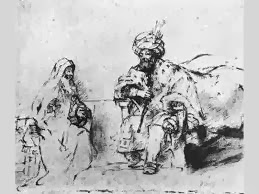 Today we have seven psalms, all of which have headings attributing them to David. Five of them are tied to specific incidents in David's story.

Create in me a clean heart, O God,
and put a new and right spirit within me.
Do not cast me away from your presence,
and do not take your holy spirit from me.
Restore to me the joy of your salvation,
and sustain in me a willing spirit.


The entire psalm features heavily in the liturgies of Lent. It is read during the stripping of the altar on Maundy Thursday and at the beginning of the service for Good Friday.

The heading for Psalm 51 connects it to the time when David was confronted by the prophet Nathan for his adultery with Bathsheba and his conspiracy to kill her husband Uriah. It's not a bad application for the psalm but the attribution is nearly impossible. The psalm dates, according to the New Interpreter's Study Bible to the 7th century BCE. Verse 18, which calls on God to "rebuild the walls of Jerusalem" would seem to be even later, from the time of Nehemiah and Ezra, the 5th century.

The heading for Psalm 52 connects it to the story in 1 Samuel 21-22 where Doeg the Edomite ratted David out to King Saul. This psalm, addressed directly to an enemy, doesn't fit that situation perfectly. The psalmist's enemy is a liar. Doeg only told Saul the truth.

Psalm 53 is Psalm 14 slightly reworked. The divine name YHWH ("Lord," in English) is replaced in several instances with Elohim ("God"). There are other small differences, but both psalms 53 and 14 ridicule fools who trust in themselves rather than God.

The heading of Psalm 54 relate it to an event in 1 Samuel 23:15-19. In it the psalmist prays for revenge on his enemies.

Psalm 55 also concerns enemies but more particularly, and more poignantly, the psalmist has been betrayed in some way by a friend:

My companion laid hands on a friend
and violated a covenant with me
with speech smoother than butter,
but with a heart set on war;
with words that were softer than oil,
but in fact were drawn swords. (Psalm 55:20-21)

But you, O God, will cast them down
into the lowest pit;
the bloodthirsty and treacherous
shall not live out half their days.
But I will trust in you. (Psalm 55:23)


The desire for revenge, though it is human and understandable, is an unbecoming motive. One thing that I love about the psalms is that no human emotion is off the table. If the psalms are, in any way, models of prayer for the believer, they teach us that we can express ourselves, even our basest desires, freely to God. Of course, this does not mean that we should expect God to bless our lower nature.

Like Psalm 34, Psalm 56 has a heading that ties it to David's sojourn in Gath (1 Samuel 21). Like the four psalms preceding and the one following it, Psalm 56 is a prayer for protection from enemies.

Psalm 57's heading relates it to David's hiding from Saul in the cave at Adullam (1 Samuel 22).