THE YEAR OF BLOGGING BIBLICALLY: DAY 171 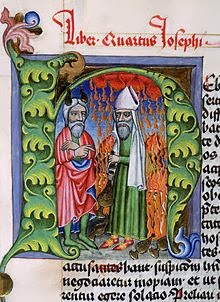 The book of Psalms is subdivided into five sections which, just to keep things confusing, are called "books." Today we finish Book I of the Psalms and begin Book II. Psalms 40 and 41, rounding out Book I, are attributed to David. Psalms 42, 44, and 45 have headings attributing them to the "sons of Korah." Psalm 43 has no heading and seems to be a continuation of Psalm 42.

Remember Korah? He's the Levite who led an unsuccessful rebellion against Moses and Aaron back in Numbers 16. He wanted equality with the Aaronic priests. I guess his descendants were still in the role of underlings.

Psalm 40 seems backwards, or schizoid, or something. I wonder if it isn't actually two psalms that got jammed together. It begins with thanksgiving for the Lord's help but ends asking for help.

Psalm 41 begins with a beatitude blessing "those who have regard for the poor." It then becomes a prayer for deliverance from illness and enemies. The psalms seem to conflate illness and enemies frequently. Verse 13, the last verse of this psalm, is actually a doxology concluding Book I.

Blessed be the Lord, the God of Israel,
from everlasting to everlasting.
Amen and Amen.

Psalms 42-43, as I mentioned, are a single composition. It has three verses strophes punctuated by the refrain:

Why are you cast down, O my soul,
and why are you disquieted within me?
Hope in God; for I shall again praise him,
my help and my God.


This psalm, apparently written by an individual living in exile. Perhaps the psalmist was a war captive. He expresses his deep longing for God, his hope for return. His remembrances of worship in his homeland are almost nostalgic.

Psalm 44 begins with a bright note about how God helped Israel displace the native Canaanites. Almost immediately the Psalm turns somber. The Israelites have suffered defeat and cry out for God to help them again.

Psalm 45 is an odd one. The heading identifies it as a "love song." It seems to have been composed for a royal wedding. It spends some time praising both the king and his queen. Though it admits of other interpretation, verse 6 seems to address the king himself as "god."