The Diverse Music of the Psalms 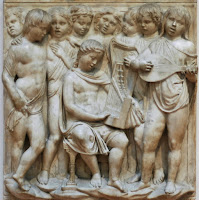 On a recent Working Preacher podcast Rolf Jacobson, who teaches at Luther Seminary, compared Psalm 46 to a country song. I think he was referring to the song's structure: stanza, stanza, refrain, stanza, refrain.

Yesterday on this blog I posted a video of Hank William's song "There's a Tear in My Beer" which I compared to Psalm 102:9 which speaks of the psalmist's drink being mingled with tears. Maybe I was being just a little facetious. Maybe. Just a little.

I have also recently posted a video of Sinead O'Connor performing her song "Whomsoever Dwells" which is based closely on Psalm 91. The song comes from Sinead's album Theology which also includes an electric version. I like the electric version better but couldn't find a decent video of it.

A few days ago a friend of mine, who is something of a metalhead, referred to some heavy metal songs as "prayers." I not only conceded the point, but, being steeped as I am in the Psalms just now, added, "I think that some of the psalms were written for electric guitars, thudding bass, heavy drums, and screaming vocals."

Of course some of the psalms were written for harp, timbrel, and lyre.

And here's the point: Reading through the psalms I am often put in mind of particular pieces of music. That's because the psalms, at least most of them, were written to be sung. They were performed on instruments that are foreign to us now (Just what is a timbrel anyway?). They were written to tunes that are now long lost, tunes like "The Dove on Far-Off Terebinths" (Psalm 56).  That is, I think that "The Dove on Far-Off Terebinths" was a tune. I suppose it might have been a rhythm, a key, a raga, an instrumentation. But I think it was a tune.

If the psalms remind me of music it is because they are music. And they are a diverse collection of music, as diverse, say, as Hank Williams and Heavy Metal. It might be an interesting exercise to read through the psalms and assign each one to a musical genre. Psalm 46 is country. Psalm 102 is blues. Etc. I'm not going to do it, but it might be interesting.