THE YEAR OF BLOGGING BIBLICALLY: DAY 173 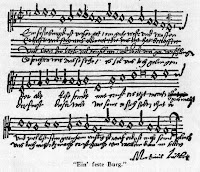 Today we have five psalms, four of them have headings attributing or dedicating them to the sons of Korah. The fifth, Psalm 50, is called a "psalm of Asaph," who is mentioned as a musician and head of one of the Levitical families in 1 Chronicles.

Psalm 46 is a Lutheran favorite. Martin Luther paraphrased it in the song that became the anthem of the Reformation, Ein' Feste Burg ist Unser Gott (A Mighty Fortress is Our God). It consists of three strophes, two of which end with the refrain:


Which leads one (this one anyway) to wonder whether the refrain also once stood at the end of verse 3. The psalms first strophe describes the threat of natural disasters. The second strophe the threat of foreign armies. The third strophe encourages the faithful to "be still" and trust in God in the face of every threat.

Psalm 47 is a song of praise which describes God as the king who rules over all nations. Verse three reads:

God has gone up with a shout,
YHWH with the sound of a trumpet.


On the basis of this verse Christians have used this psalm to celebrate Jesus' ascension ("God has gone up") and Jews to celebrate Rash Hashanah ("the sound of a trumpet") when shofars (trumpets made of ram's horns) are blown.

Psalm 48 is a song of Zion, that is, a psalm that uses the imagery of God's holy city, Jerusalem, and its temple on Mt. Zion. Here Zion inspires joy in the faithful (vv.1-3) and fear in Israel's enemies (vv. 4-8). It ends with instructions to make a procession around the city.

Psalm 49 stands in Israel's wisdom tradition. All people, even the rich, wise, and powerful, are mortal. Therefore, they are not to be feared.

Psalm 50 seems to be a liturgy in which a priest or temple prophet, speaking in the words of God, admonishes the people. Their sacrifices are vain unless they live godly lives.