THE YEAR OF BLOGGING BIBLICALLY: DAY 242 Like his older contemporary Jeremiah, the prophet Ezekiel was a priest. Unlike the other major prophets, Ezekiel's oracles are mostly related in prose. His visions are, if anything, more bizarre than what we have yet seen. (Daniel's visions, though more directly analogical, rival Ezekiel's for weirdness). His prophetic acts are more outrageous than Jeremiah's.

Ezekiel was probably taken into exile along with KIng Jehoiachin in 597 BCE.His prophetic activity began in 593 and continued through at least 571, according to the introduction in Augsburg Fortress's Lutheran Study Bible.

At any rate, Ezekiel's first vision is dated to the fifth day of Tamuz (sometime in August), 593. It came to him by the river Kebar in Babylon (Ezekiel 1:1-3).

What a vision! Ezekiel describes four living creatures, each with four faces. The faces of the eagle, lion, ox, and human were later used as symbols of the New Testament's four evangelists: Matthew, Mark Luke, and John. Beside each of these creatures is a "wheel within a wheel" which can, apparently, move in any direction without turning. Above the wheels is a "firmament" ("vault" in the NIV) on which sits the throne of YHWH. There is a tradition of Merkabah mysticism in Judaism in which the individual seeks to ascend to God by contemplation on Ezekiel's vison.

The visionary experience continues in chapter 2 as YHWH commissions Ezekiel to be his mouthpiece. God gives the prophet a scroll that is covered on both sides with "lament, mourning, and woe" (v. 9).

In chapter 3 Ezekiel eats the scroll which tastes sweet (v. 3). He is now, presumably, full of YHWH's words. In verse 14 Ezekiel expresses anger, though whether this is his personal feeling or whether he is angry on YHWH's behalf is hard to say. The vision ends and Ezekiel finds himself back at the Kebar where he sits, stunned or distressed, for 7 days.

In verses 16-27 YHWH tells Ezekiel that he is to serve as a watchman. He reiterates that Ezekiel is responsible to speak his words, but not responsible for the results (vv. 19-21). YHWH instructs Ezekiel to live in isolation (vv. 24-25). The prophet's life is a lonely one.

In chapter 4 (vv. 1-8) we read of Ezekiel's first prophetic acts.The New Interpreters Study Bible uses the felicitious description "street theater." Ezekiel builds a little model of Jerusalem and then, like a child playing with toy soldiers, lays siege to it. He lies on his left side for 390 days for the sins of Israel, then on his right side 40 days for Judah. Each day represents a year. A note in the Jewish Study Bible mentions a tradition that it was 390 years from the time that Israel entered Canaan under Joshua until the destruction of the Northern Kingdom.

In verses 9-17 Ezekiel is instructed to eat bread made of mixed grains cooked over human excrement as a symbol of the hardship of the pending siege and the impurity that will be incurred during its rigors. When Ezekiel balks, YHWH backs off on the human excrement (Thank you, Lord) and allows Ezekiel to use cow dung instead. I have read about America's westward pioneers using buffalo chips for cooking fuel so, really, this doesn't sound so bad.

There is a brand of bread made from various sprouted grains and legumes based on the "recipe" in Ezekial 4:9. You can buy it in health food stores. I'm sure it is delicious as well as nutritous. The stuff that Ezekiel ate, on the other hand, was supposed to be disgusting. 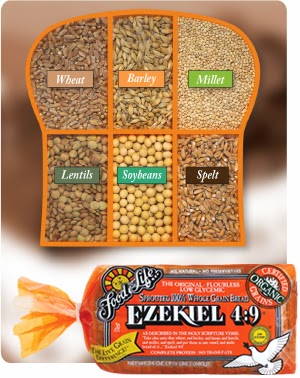