THE YEAR OF BLOGGING BIBLICALLY: DAY 247 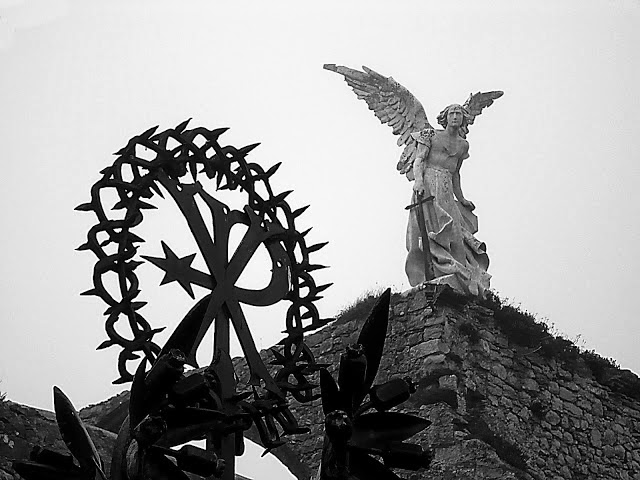 In Ezekiel 21:1-17, the prophet is told to prophesy against the Temple and the land of Israel. YHWH is going to "cut off" both the wicked and the righteous (v. 3). This oracle is poetic in form and, according to the New Interpreters Study Bible there are "difficulties in the Hebrew text." Those difficulties must account for the differences in translation between the New Revised Standard Version and the New International Version. Here, for example, is verse 10 in both versions:

[A sword is] sharpened for the slaughter,
polished to flash like lightning!

Shall we rejoice in the scepter of my royal son? The sword despises every such stick.
(NIV)


[A sword] is sharpened for slaughter,
honed to flash like lightning!How can we make merry?
You have despised the rod
and all discipline.
(NRSV)

Testing will surely come. And what if even the scepter, which the sword despises, does not continue? declares the Sovereign Lord.
(NIV)

For consider: What! If you despise the rod, will it not happen? says the Lord God.
(NRSV)


In verses 18-24 the sword, which represents Babylon, comes to a fork in the road. Directed by divination, the sword bypasses Ammon and comes to destroy Judah and Jerusalem. Ammon will get its comeuppance later (vv. 28-29).

Verses 25-27 are directly addressed to a ruler, probably Zedekiah. His crown will be taken from him and reserved for a good king. Though Ezekiel probably expected it, kingship was never re-established in Jerusalem. For later readers verse 27 takes on a messianic tone.

In verses 30-32 the sword is returned to its sheath. Having served as YHWH's instrument of judgment, the sword itself will be judged.

Chapter 22 consists of three oracles against Jerusalem. That city has been full of idolatry, violence, and violation of the Torah (vv. 1-16). It has become dross, the impurities that are refined out of silver, and will be dealt with accordingly (vv.  17-22). The city's leaders have been complicit and bear responsibility:

So I will pour out my wrath on them and consume them with my fiery anger, bringing down on their own heads all they have done, declares the Sovereign Lord.      (Ezekiel 22:31, NIV)


The photo of the Exterminating Angel came from this website. I don't know enough Spanish to recommend or pan it. Next: Ezekiel 23-24
Posted by Brant Clements at 6:30 PM