THE YEAR OF BLOGGING BIBLICALLY: DAY 243 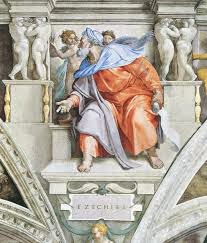 YHWH repeatedly addresses Ezekiel as "Son of man," a Hebrew idiom that simply means "human being." In Daniel the term will be used to describe a heavenly figure, as contrasted to a series of beasts. By the time we get to the New Testament "Son of Man" will be a title for the Messiah. The NRSV renders the phrase in Ezekiel as "Mortal" which is not a bad translation.

In chapter 5, YHWH commands Ezekiel to perform another prophetic act. He shaves his head and face with a sharp sword. I don't care how sharp or how short the sword, I'll stick to a razor, thank you. Ezekiel divides his hair into thirds, apparently by weight. One third will be chopped up with the sword, one third burned, one third scattered. A few hairs are saved. So it will be for Israel (which I must assume refers here to Judah). A remnant will be saved. The rest are going to die by famine, wild beasts, plagues, and bloodshed (v. 17).

Chapter 6 tells us that YHWH is really, really angry about Israel's idolatry (vv. 1-7). The people will be destroyed but a remnant will be left to remember that YHWH caused the devastation (vv. 8-10). Verses 11-14 invoke the triumvirate of Judah's destruction: sword, famine, and plague. The chapter ends (v. 14) with a statement of the purpose of all this bloodshed: "Then they will know that I am YHWH."

Chapter 7 turns to poetry. The prophet foretells the end of Israel. There will be doom, disaster, wrath, judgment, violence, sword, plague, and famine. When they see it coming down the people will wet themselves:

Every hand will go limp;
every leg will be wet with urine.
(Ezekiel 7:17 NIV)

Ezekiel isn't one to sugarcoat his message. Chapter 7 may be poetry but it is not pretty.

In chapter 8 the prophet relates another vision. This one takes place 14 months after the inaugural vision of chapter 1, that is, in 592 BCE. In this vision something that looks human transports Ezekiel to Jerusalem where he sees an idol set up in YHWH's temple. (Did such an idol ever actually stand in the temple)? Ezekiel sees 70 of Israel's elders, including a member of a prominent family, worshiping idols in the dark; the women of Israel performing ritual mourning for a Mesopotamian diety, Tammuz; and 25 men, their backs to the sanctuary, worshiping the sun. And if that weren't enough:

Then he said to me, "Have you seen this, O mortal? Is it not bad enough that the house of Judah commits the abominations done here? Must they fill the land with violence, and provoke my anger still further? See, they are putting the branch to their nose"
(Ezekiel 8:17 NRSV)


On top of idolatry, the land is full of violence!

The significance of "putting the branch to their nose" is  no longer known. The New Interpreters Study Bible says that it "may be a vulgar or insulting gesture that epitomizes rejection of the LORD." The Jewish Study Bible suggests that it is "some noxious idolatrous practice." Whatever it is, YHWH doesn't like it.