THE YEAR OF BLOGGING BIBLICALLY: DAY 255

Remembering that Ezekiel was a priest helps to explain his concern for the Temple. In chapter 10 he described a vision of YHWH's glory leaving the temple. The Lord was offended or driven out by the people's idolatry and injustice. In chapter 33 he received word of Jerusalem's fall and, we may assume, the Temple's destruction. In today's reading the prophet sees a vision of a rebuilt Temple, larger and grander than Solomon's, to which YHWH's glory will return in chapter 43.

Though Ezekiel's temple, its dimensions and decor, are described in detail I don't think the Second Temple (Zerubabel's Temple) was built according to his plan. Herod's expansion of the Second Temple may have approximated the grandeur Ezekiel envisioned.

In chapter 40 Ezekiel sees a "man" with an appearance like bronze. He uses measuring stick to determine the dimensions of the Temple. Verses 45-46 show Ezekiel's support for the Zadokite priests who were the primary priests of the Second Temple for about 350 years.

The tour of Ezekiel's visionary Temple, its outbuildings and environs, with descriptions of its decor, continues through chapter 42. 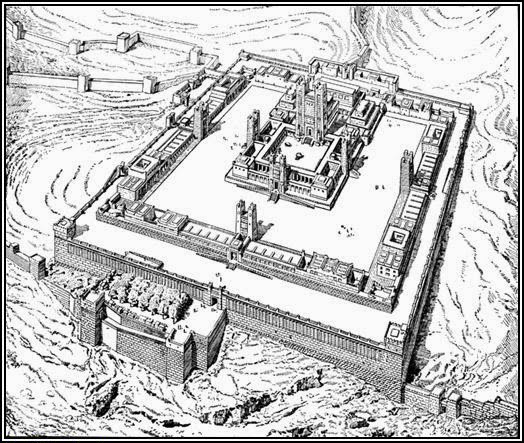