Before We Plunge Into the Book of Isaiah

From the very first verse of Isaiah it is clear that, without some historical background, a reader will be lost.

The vision concerning Judah and Jerusalem that Isaiah son of Amoz saw during the reigns of Uzziah, Jotham, Ahaz and Hezekiah, kings of Judah.


Fortunately we have met these four kings of Judah, and the prophet Isaiah himself, in the books of 2 Kings and 2 Chronicles. My point is that Isaiah spoke in real historical contexts. Unless we keep those contexts in mind we will not understand the prophet's writings.

The book of Isaiah addresses situations that existed in Judah from 742 BCE through 537 BCE or later. Some commentators take this to mean that Isaiah had amazing predictive abilities. Critical scholarship suggests instead that the book contains of Isaiah writings from multiple authors in three distinct time periods.

First Isaiah (Isaiah of Jerusalem, the son of Amoz) was active during the Assyrian period (c. 742-701 or possibly 689). He addressed king Ahaz when, threatened by a Syrian/Israelite coalition, the king sought military aid from the Assyrians. His work is found in chapters 1-39, though chapters 24-27 (The Isaiah Apocalypse), and 34-35 probably date to later times. Chapters 36-39 are a prose narrative virtually identical to 2 Kings 18:13-20:19 and possibly copied from that work.

Second Isaiah, chapters 40-55, gives oracles of hope to the Judahites living in Babylonian exile. Chapters 34-35 may also belong to this period.

Third Isaiah, chapters 56-66, are from the Persian period and address the situation of the returned exiles and their tasks of rebuilding Jerusalem.

Each of these three sections has unique stylistic features. Still, there is a cohesive unity book of Isaiah as we now have it. This may be because the book was heavily redacted into its final form or because it was the work of a distinct Isaianic school of prophets. Or both. Or something else.

Throughout Isaiah there is concern for Jerusalem as the City of God, emphasis upon the legitimacy of the Davidic dynasty, and stress upon the need for social justice. In the People's Companion to the Bible (page 155) Hyun Chul Paul Kim notes that a "leading motif in Isaiah is humanity's inability to see or hear."

Of the prophetic books, Isaiah is most frequently quoted in the New Testament. In fact, with the possible exception of the Psalms, Isaiah is cited in the New Testament more often than any other book of the Hebrew Bible. Christian interpreters have always seen allusions, parallels, and even predictions of Jesus' life and career in passages from Isaiah. I'll try to note these as they come up. 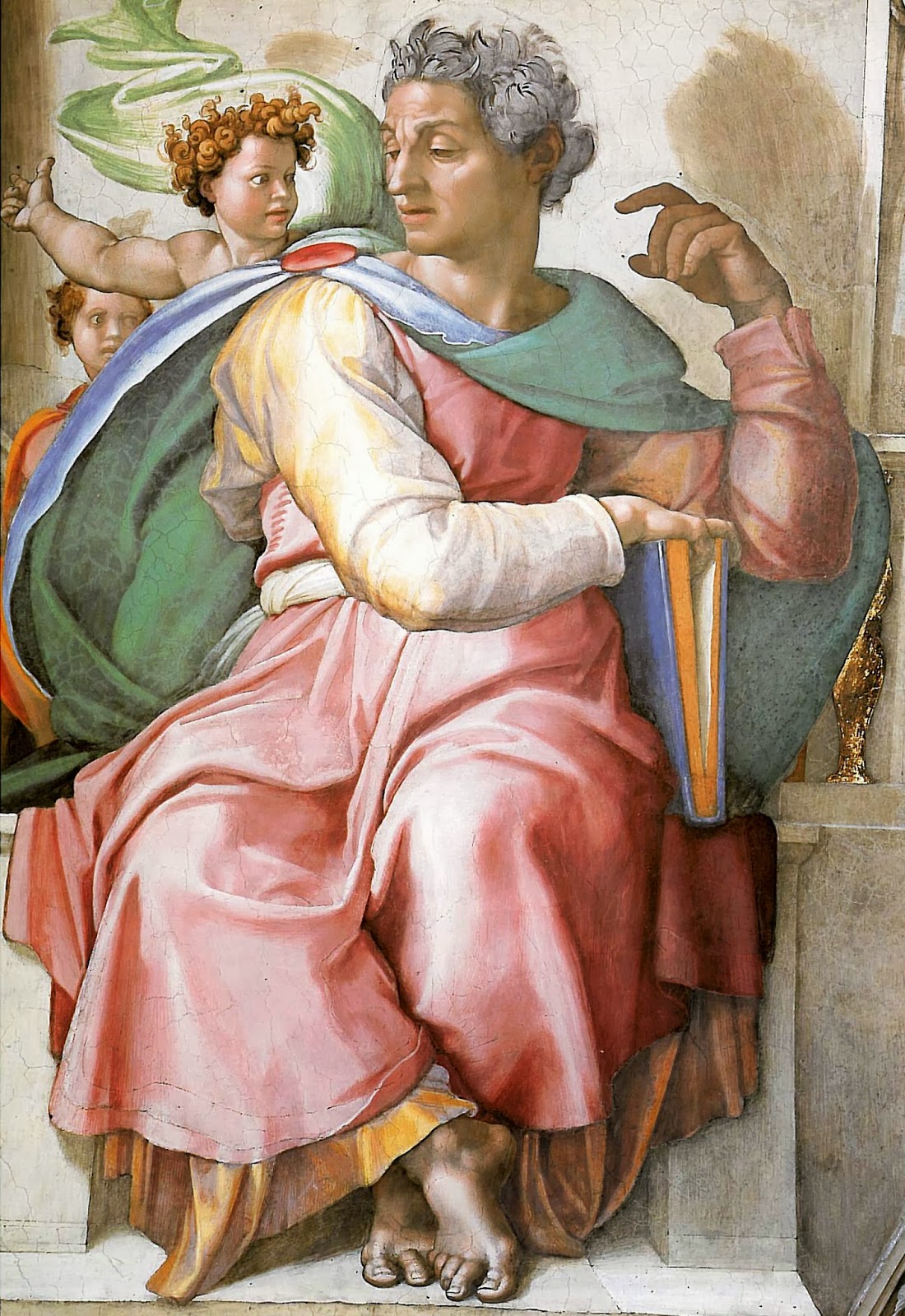 I found the image of Michaelangelo's Sistine Chapel depiction of Isaiah at wiki.

Posted by Brant Clements at 5:13 PM