THE YEAR OF BLOGGING BIBLICALLY: DAY 208 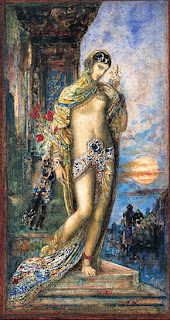 There is a legend, a romantic fiction, that Solomon wrote the Song of Songs when he was young and full of sap, the Proverbs when he was fully mature, and Ecclesiastes when he was old and bitter. Although all three books have been associated with Solomon's name, it is unlikely impossible that he, if he wrote any part of them, is responsible for their finished form.

According to the introduction to the Song of Songs in the CEB Study Bible, the language and imagery of this book date it to the 4th or 3rd century BCE. From what I can discover this seems to represent a scholarly consensus. The Jewish Study Bible's introduction mentions that there is also some archaic language to be found in the Song.

Song of Songs is a Hebrew superlative like "King of kings" and "Lord of lords." It indicates that this is the very best song. There is some question as to whether the Song is a single composition or a collection of poems. There are narrative passages in the Song but no discernible narrative structure to the whole.

Like the book of Esther, the Song of Songs does not mention God or any religious practices.

The Song of Songs is made up of frankly erotic love poetry. Most of the poems are in the voice of a woman, a Shulammite (6:13), who is "dark and lovely" (1:5). Her darkness may be a result of laboring outdoors (1:6), an indication of lower economic status. Other poems are in the voices of her beloved whom she calls a "king" (1:4 et al). Could social class have been an impediment to their love? The daughters of Jerusalem speak as a sort of Greek chorus, and the woman's brothers have a small speaking part (8:8-9) though not all translations indicate this. For the most part the Hebrew text is clear about who is speaking though some passages are in doubt. For example, at Song of Songs 8:11-12 the CEB ascribes the words to the man, the NIV to the woman. It makes a difference as these verses refer to Solomon in the third person. Those who defend Solomonic authorship would prefer the woman to speak these lines.

How beautiful you are and how pleasing,
my love, with your delights!
Your stature is like that of the palm,
and your breasts like clusters of fruit.
I said, “I will climb the palm tree;
I will take hold of its fruit.”
(Song of Songs 7:6-7)


Some of the imagery is foreign to modern westerners:

Your hair is like a flock of goats
descending from the hills of Gilead.
Your teeth are like a flock of sheep just shorn,
coming up from the washing.
Each has its twin;
not one of them is alone.
(Song of Songs 4:1b-2)


It may help to keep in mind that goats and sheep were measures of wealth, and that a full set of white teeth was probably rare in those days before toothpaste and modern dentistry.

Frankly, I can't imagine that any such allegory was originally intended by the author/s of the Song. This is ancient, sexed-up love poetry. Romantic love and sexual desire are gifts of God. No allegory is necessary.

I had a little fun with the Psalms, suggesting modern musical genres for some of them. The Song of Songs should be a soulful duet, maybe something by Barry White and Lisa Stansfield.

If it didn't have to be a female/male duet, I'd have gone with this number from Barry White and Isaac Hayes:


I found Gustave Moreau's painting of the Shulamite woman at wiki. Next: Isaiah 1-4
Posted by Brant Clements at 12:00 PM