THE YEAR OF BLOGGING BIBLICALLY: DAY 214 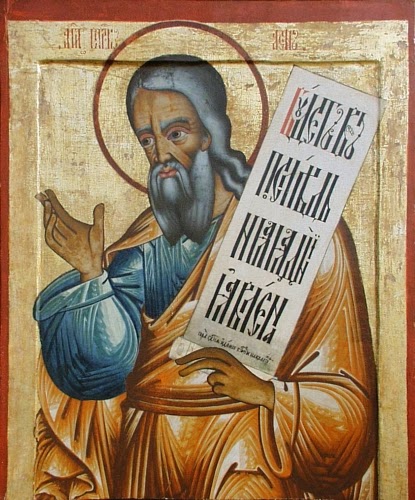 Chapters 13-22 of Isaiah contained a series of oracles concerning various nations, peoples, and cities. They were, in order: Babylon, the Philistines, Moab, Damascus, Cush, Egypt, Babylon (again), some Arabian cities,  and Jerusalem (specifying two individuals in that city). Now, in chapter 23 the Phoenician seaport city of Tyre gets its turn.

Tyre was attacked and defeated by the Assyrians in 734 and again in 701 BCE. Isaiah may have had one of these incidents in mind. Verses 1-14 are an oracle about Tyre's destruction framed by the words "Wail, you ships of Tarshish!"

Verses 15-18 describe the restoration of Tyre after 70 years. That restoration is partial at best. Once a great merchant city, Tyre is now reduced to the status of a prostitute (verses 15-16). The 70 years is probably a symbolic number signifying a period of desolation. Psalm 90:10 says that 70 years is the span of a human life. Jeremiah 25:11 says that Judah will be in bondage to Babylon for 70 years.

Chapters 24-27 make up the "Isaiah Apocalypse." Though embedded in the section that scholars call "First Isaiah" these chapters may well have been written in the Persian period (i.e. after the return from exile) or possibly the even later Hellenistic period according to the notes in the Jewish Study Bible. The preceding chapters dealt with specific times, places, and events. These chapters speak about the end of the world in more general terms.

In chapter 24 we read that YHWH is about to lay waste to the earth. While people--possibly Judah, maybe all people--praise God for this display of power, verse 16 tells us that the treacherous still betray.

Chapter 25 is a song of praise for God's salvation. Though it is unspecified, there may have been a historic referent for the fortified city that is reduced to rubble in verse 2.

Verses 6-9 are a common reading for Christian funerals. They describe a future time when all people will be nourished and comforted at "this mountain" which I take to be Mount Zion in Jerusalem. Whether this passage reflects a belief in life after death is an open question. This may be an early hint of a doctrine of resurrection or, as the Jewish Study Bible notes, it may use the imagery of dying and rising, like Ezekiel 37, as a metaphor for restoration, revitalization, and return from exile.

Verses 10-11 are an ugly swipe at Moab that seems out of place in this section.

On the question of life after death Chapter 26 doesn't help much. Verse 14 states bluntly:

The dead do not live; shades do not rise—
because you have punished and destroyed them,
and wiped out all memory of them.
(New Revised Standard Version)

While verse 19 contradicts it:

But your dead will live, LORD;
their bodies will rise—
let those who dwell in the dust
wake up and shout for joy—
your dew is like the dew of the morning;
the earth will give birth to her dead.


I quoted the NRSV above because, as it so often does, the New International Version translates the difficulty away. The NIV renders verse 14:

They are now dead, they live no more;
their spirits do not rise.
You punished them and brought them to ruin;
you wiped out all memory of them.


Chapter 27 is a vineyard song similar to the one we read in 5:1-7. Here the emphasis is on YHWH's ongoing care for the vineyard. Verse 4 says that YHWH is not angry but there is still a note of warning. Verses 9-12 describe the desolation of exile and the joy of return. At least I detect joy in the imagery of the harvest.


Except where noted Scripture quotes are taken from the New International Version. The Isaiah icon came from wiki.