THE YEAR OF BLOGGING BIBLICALLY: DAY 211 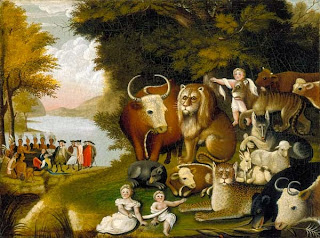 If you have ever attended a Christmas Eve service of worship, if you have ever heard Handel's Messiah, Isaiah 9:1-7 should sound familiar. The poem in this passage was probably composed for the coronation of King Hezekiah of Judah, whose faults were noted in 2 Kings and whose reforms were idealized in 2 Chronicles.

Psalm 2 was one of the royal psalms, probably composed for another coronation. It included the words "You are my son. Today I have begotten you" (verse 7). The idea that, at his coronation, the king was reborn a son of God also occurs in Isaiah 9:6-7:

For a child has been born for us,
a son given to us;
authority rests upon his shoulders;
and he is named
Wonderful Counselor, Mighty God,
Everlasting Father, Prince of Peace.
His authority shall grow continually,
and there shall be endless peace
for the throne of David and his kingdom.
He will establish and uphold it
with justice and with righteousness
from this time onward and forevermore.


It is almost impossible for Christians not to apply these words to the birth of Jesus. It is entirely impossible that this is what Isaiah intended. Isaiah who, we have noted, was a big fan of the Davidic dynasty, composed these words as a tribute to a king of his own time. He may have idealized a bit but so did the Chronicler it seems.

I suppose one could argue that God had a double intent for Isaiah's poem: it was meant to apply to Hezekiah in Isaiah's own time and to Jesus at a later time. That argument would rest on unprovable assumptions about the prophet's inspiration.

To me it makes more sense to say that these words, like other Old Testament passages, are not predictions per se. Instead they apply to Jesus typologically. The writers of the New Testament, seeking to understand the Christ event, found models in their Bible--our Old Testament. Christians ever since have followed suit.

Isaiah 9:8-10:4 is an oracle concerning the destruction of Israel, the Northern Kingdom, by Assyria. The point: YHWH is really angry over injustice in Israel. This refrain is repeated four times:

For all this his anger has not turned away;
his hand is stretched out still.


The same words occured at Isaiah 5:25. The New Interpreters Study Bible notes suggest that 5:25-30 may have originally belonged to the passage at hand.

Isaiah 10:5-19 is an oracle against Assyria. That nation may have been YHWH's tool to punish Israel, but it too will be punished in turn for its pride. Assyria has not subjected itself to YHWH. It has been too rapacious in turning on Judah and Jerusalem.

Isaiah 10:20-23 promises that a remnant of Israel will return. Whether by "Israel" Isaiah means the Northern Kingdom or the children of Israel, (ie, both kingdoms) is not entirely clear to me.

In Isaiah 10:24-34, the prophet tells Zion not to fear the Assyrians. They have destroyed other cities, but YHWH will not allow them to conquer Jerusalem.

Chapter 11:1-9 is an oracle about an ideal Davidic king. The cut off "stump" of David's father Jesse will sprout anew. Verse 2 has found its way into some baptismal liturgies:


The imagery of verses 6-9 give us a vision of Eden restored, the world living in a state of shalom.

The wolf shall live with the lamb,
the leopard shall lie down with the kid,
the calf and the lion and the fatling together,
and a little child shall lead them.
The cow and the bear shall graze,
their young shall lie down together;
and the lion shall eat straw like the ox.
The nursing child shall play over the hole of the asp,
and the weaned child shall put its hand on the adder's den.
They will not hurt or destroy
on all my holy mountain;
for the earth will be full of the knowledge of the Lord
as the waters cover the sea.


Would that it were so!

The remainder of chapter 11 describes the return of the remnant using imagery borrowed from the exodus. Chapter 12 contains two brief songs of praise that will be sung "in that day."

The image of Edward Hicks' painting The Peaceable Kingdom was taken from the Worcester (Massachusetts) Art Museum website. Bible quotes are from the New Revises Standard Version because its a good translation and I happened to have it at hand.