THE YEAR OF BLOGGING BIBLICALLY: DAY 218 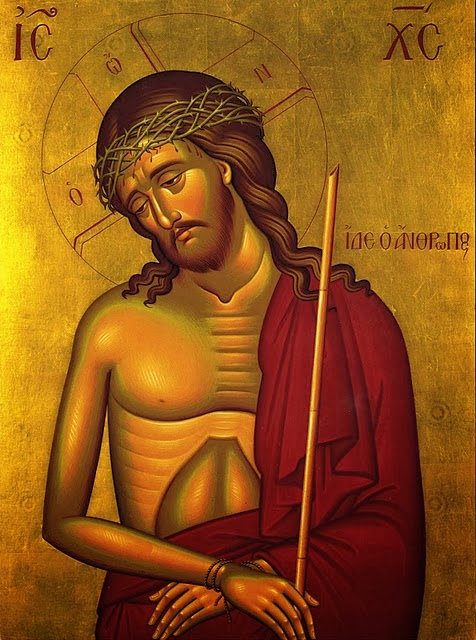 There are four poetic passages in Second Isaiah that have traditionally been identified as "Servant Songs." These are Isaiah 42:1-4 (or 9), 49:1-6, 50:4-11, and 52:13-53:2. What unites these passages is their descriptions of an ideal servant of YHWH who is tasked with a mission, who suffers, and who redeems YHWH's people. The identity of the servant has been the subject of debate. Is it the prophet himself? (Some passages such as 49:4 seem to refer to an individual apart from Israel). Is it the Israelite community? (Throughout second Isaiah Israel/Jacob/Judah are called "servant"). Or is it the Messiah, specifically Jesus?

There are four "servant songs" in which the servant is the Messiah.

[N]either an individual nor Israel collectively can qualify as the Servant described in vv 1-9 and in the other Servant Songs....In these passages it becomes increasingly clear that Isaiah is not speaking "about himself or about someone else" among his fellow Israelites but is proclaiming "the good news about Jesus."


Concordia's The Lutheran Study Bible also identifies Isaiah of Jerusalem as the writer of all of the oracles in the book that bears his name.

In the late- nineteenth century, scholars identified four texts from Second Isaiah as "servant songs"..., frequently interpreting them apart from the context of the book and attempting to discover the particular identity of the servant. Christians tended to see the servant as an individual and identified him with Jesus, who like the servant suffers, is rejected, and bears the sins of many.... Jewish readers saw the servant corporately as Israel .... It is now agreed that the four passages must be read in the context of the book and in relation to other texts that seem clearly to identify Israel as God's servant (41:8- 9; 42:19; 43:10; 44:1- 2, 21; 45:4; 48:20). Still, in the traditional four servant songs, the servant is given a particular commission or task that sometimes sounds quite individual. In 49:1- 6 and 50:4- 11, the servant speaks directly and sounds like the prophet. Certainly the servant is Israel, but it may also be true that sometimes a particular member of Israel represents the whole people.


The CEB Study Bible takes a moderate approach to the question:

Christian tradition tended to read this and the other servant passages in Second Isaiah...as predictions of Jesus. The context of these passages shows that the servant was a model for returning Israel for Second Isaiah's earliest readers. Since Jesus also lived as a model Israelite in his time, it makes sense to understand him in terms of these passages without excluding the earlier understanding of the prophet's readers.


Personally I see no sense in taking the Servant Songs apart from their context in the book of Isaiah or their historical context. The servant is Israel and, perhaps occasionally, the prophet. In context, the Servant Songs do not speak of the Messiah and certainly were not meant as predictions of Jesus' life and career. They do, however, provide excellent material for meditation about Jesus. The New Testament's use of Isaiah's servant imagery indicates the continuity between the two Testaments. In Jesus Christ the God of Israel continued to work in ways that were consistent with his character as revealed in the Hebrew Scriptures.

In chapters 40-41, YHWH challenged the gods--"worthless idols"--of the nations. No other god is so powerful. YHWH is in charge of all nations, and YHWH is going to bring Israel, what's left of it, home.

Chapters 42-44 continue the same oracle. Chapter 42 begins with the servant passage discussed above. Verses 10-17 are a song of praise to YHWH (commanded by YHWH?) who will bring Israel home through the wilderness. Verses 18-28 declare that Servant Israel has been deaf and blind. I have already noted that vision and hearing, especially the lack thereof, are themes of Isaiah.

We pause to note that no one has tried to equate the servant of 42:19 with Jesus.


Chapter 42 ends with a statement that God sent Israel into exile as punishment verses 23-25.

In Chapter 43 YHWH speaks tenderly to Israel. Isaiah 43:1 is sometimes quoted, without regard to context, in reference to Christian Baptism. This promise is to a community, not an individual.

But now, this is what the LORD says—
he who created you, Jacob,
he who formed you, Israel:
"Do not fear, for I have redeemed you;
I have summoned you by name; you are mine."


YHWH will redeem them because they are his people. Other nations are given in ransom for Israel, whatever that means. In verses 14-28 YHWH proclaims that he has been faithful to Israel though Israel has been unfaithful to YHWH. But YHWH is doing a new thing (verse 19), taking the exiles home.

In Isaiah 44:1, YHWH calls Israel "Jeshurun," a name that mans "upright." Verses 7-20 mock idols and those who make and worship them. Have I mentioned that Second Isaiah really dislikes idols? Verses 21-24 declare YHWH's forgiveness for Israel's offenses and call on nature to join in a psalm of praise.

Verses 24-28 declare that Jerusalem and the towns of Judah will be inhabited once more. In verse 28 YHWH

...says of Cyrus, ‘He is my shepherd
and will accomplish all that I please;
he will say of Jerusalem, “Let it be rebuilt,”
and of the temple, “Let its foundations be laid.”’


Cyrus is, of course, the Persian emperor who conquered Assyria and permitted the Judahite exiles to return to their homeland. In Isaiah YHWH's power is so expansive that even Cyrus, the pagan conqueror, is his unwitting subject.


Scripture quotations are from the New International Version. Next: Isaiah 45-48
Posted by Brant Clements at 12:00 PM