THE YEAR OF BLOGGING BIBLICALLY: DAY 126 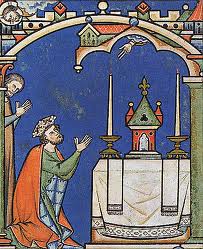 History is not the bald recitation of dates and events. The telling of history always involves interpretation. The Chronicler gives an alternative history to that found in 1 Samuel-2 Kings. The Chronicler imparts his (and he was most probably male) spin by judiciously omitting facts (there is no mention of the Bathsheba incident in Chronicles), creating speeches (which I think was a common technique in ancient historiography), and suggesting motives which were not found explicit, perhaps not even implicit, in the Samuel-Kings narratives.

For example, the Chronicler tells us that David's first attempt to bring the ark to Jerusalem was unsuccessful because it was not carried by the Levites. 2 Samuel 6 makes no mention of the Levites. The Chronicler may have been working with a different recension of 2 Samuel than the one we know from the Masoretic Text.

The Chronicler also notes that David's wife Michal, the daughter of Saul, sees David dancing before the ark and "despises" him. Chronicles doesn't tell any of the back story, however, and the confrontation between David and Michal is not narrated. In 2 Samuel 6 it seems that Michal is upset because David has made a fool of himself. In Chronicles it seems that she hates him for taking her father's throne.

At any rate, the ark is brought to Jerusalem and set up in a tent. This tent is not the Tabernacle which is in Gibeon at this time. Worship  and prayer take place in Jerusalem but sacrifices are offered at Gibeon. This will be the case until Solomon builds the temple.

David provides yummy comestibles to every person in Israel and then appoints liturgical personnel for worship.

In 1 Chronicles 16:8-36 there is a psalm. Just who sings it is an open question. Perhaps David taught it to the appointed singers. The psalm is cobbled together from parts of Psalms 105, 96, and 106. Everyone says "Amen."

Chapter 17 recounts events from 2 Samuel 7. David lives in a house (i.e. domicile). He wants to build a house (i.e. temple) for YHWH. YHWH, through the prophet Nathan, promises to make a house (i.e. dynasty) for David instead. David's son will build YHWH's house. A notable omission from the account in 2 Samuel is YHWH's threat of punishment against David's son in the event of transgression. This is typical of the way the Chronicler sanitizes the story of David and Solomon.