THE YEAR OF BLOGGING BIBLICALLY: DAY 117 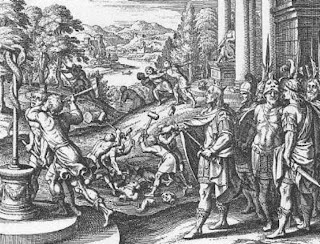 The northern kingdom is gone forever. In Judah Hezekiah, a new king  from David's line, has taken the throne. He is, according to the author(s) of 2 Kings, one of the good guys. One of the best.

Hezekiah trusts YHWH. He does right. He removes the high places. He destroys the nehushtan, the bronze snake that Moses made to save the Israelites from snakebite back in Numbers 21. The Judahites had been worshiping it. Seems like they'd bow down to any graven image. He rebelled, more or less successfully, against the Assyrian overlords and kicked some Philistine butt too.

2 Kings 18:9-12 recount the fall of Israel and the exile of its people. Beginning at verse 13 we have an account of Hezekiah's dealings with the Assyrians. At first he capitulates and pays heavy tribute. It must not have been enough because king Senecharib of Assyria sends his officials (with odd sounding official Assyrian titles: Tartan, Rabsaris, and Rabshakeh) to parlay with Hezekiah's officials. If I read it correctly, the meeting takes place outside of the city of Jerusalem but within earshot of the city walls. Aramaic was the regional lingua franca but the Assyrians insist on speaking Hebrew so that the Jerusalemites will hear and understand. They bad-mouth YHWH (as if he were just another national god) and threaten to besiege the city.

In chapter 19 we meet, for the first time, the prophet Isaiah. He assures the king's officials that they have nothing to fear from Senecharib. The Rabshakeh, via messenger, starts a second round of negotiations with Hezekiah. That is if threats and insults to one's God can be considered negotiation. Hezekiah prays. Isaiah prophesies. Senecharib will pay for his blasphemies. Jerusalem may eat what grows of itself (i.e. be beseiged?) for two years but in the third year they will cultivate crops again.

That night an angel of the Lord (the same one from Exodus 12?) kills 185,000 Assyrians in their camp. Sennecharib goes back to Assyria. Some years later he is murdered by his own sons while worshiping in the temple of his god Nisroch. Apparently YHWH could save Jerusalem, but Nisroch couldn't do a thing for Sennacharib.

The chronology of the events in these chapters is not entirely clear. There are extant Assyrian records that describe Sennacharib's campaign against Jerusalem. Their description of events varies somewhat from what we have here. Apparently the Assyrians claim to have exiled quite a few Jerusalemites. There is no mention of an angel killing 185K Assyrian soldiers.