THE YEAR OF BLOGGING BIBLICALLY: DAY 116 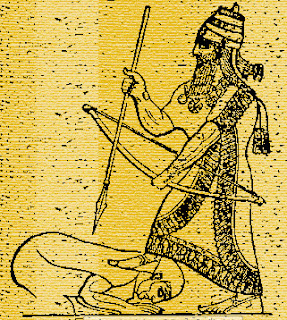 King Amaziah of Judah has a long reign. He's not bad. He just doesn't crack down on the high places, which the author of 2 Kings finds objectionable. Amaziah has leprosy, a fact which, like everything else in the books of Kings, is attributed to YHWH. The Lord is not only an interventionist God, he's also something of a micromanager according to these books. Because of Amaziah's illness, and I think mostly because it rendered him unclean, his son Jotham takes care of matters in the palace. Jotham will succeed his father as king.

Next we have a rapid succession of kings in the north. Zechariah, the fourth and, as predicted, last generation of Jehu's dynasty is assassinated by Shallum who takes the throne. Shallum reigns for one month before he is killed by Menahem. Menaham sacks Tiphsah and rips open its pregnant women. War is hell.

Manhem reigns for 10 years. When Assyria comes up against him, he pays tribute and avoids destruction. Menahem's son Pekahiah is next on the throne. His reign is a brief two years. He is killed by Pekah who then rules Israel for 20 years. During Pekah's reign Isreal loses significant territory to the Assyrians. Many Israelites are dported. Pekah is overthrown and assassinated by Hoshea who will be Israel's last king. We'll come back to him.

None of these kings of Isreal is assessed positively. All but Shallum are said to have "done evil in the Lord's sight." Shallum probably would have done evil too if he'd held the throne longer. All of them persist in the sins of Jeroboam: unauthorized forms and times of worship.

Chapter 16 puts us back in Judah. There king Ahaz has ascended to the throne after his father Jotham. His kingship is not reviewed favorably. He makes his son "pass through fire," which may be a circumlocution for child sacrifice, or it may mean some kind of trial by ordeal. Whatever it is, it's detestable. Although other Judahite kings did not remove the high places, Ahaz is the first king since Solomon who is said to worship at them. When Pekah of Israel and king Rezin of Aram come up against Ahaz in Jerusalem, Ahaz sends tribute to Assyria and requests help, an action which the prophet Isaiah will roundly condemn when we get to the book that bears his name. Despite prophetic objections, it works. Assyria attacks Aram and kills king Rezin.

When Ahaz travels to Assyria to meet king Tiglath-Pileser, he worships at a pagan altar there. He has a replica of that altar built for the Jerusalem temple. Did he introduce the worship of foreign gods into YHWH's temple? It isn't clear. YHWH's old bronze altar is then used by the king for divination. He makes other alterations to the temple which are somehow for the sake of the Assyrian king. At his death Ahaz is succeeded by his son Hezekiah.

Chapter 17 returns us to the northern kingdom. Hoshea will be the last king of Israel. He is a vassal to Assyria but, when he approaches Egypt to form an alliance, the Assyrians march in, conquer Israel, and carry its people into exile.

Well, not all of them. As a matter of historical fact, to deport an entire population was impracticable. The Assyrians probably carried the rich, the powerful, and the elite into exile leaving the poor and powerless behind. As was their practice, the Assyrians scattered the exiles throughout their empire and resettled other conquered peoples in the land.

Syncretism. Idolatry. Worship in unauthorized places and times. Worship of gods other than YHWH. If you haven't caught on by now, these are the worst imaginable offenses in the books of Kings. Israel was guilty of all these and more. For this reason, we are told, YHWH rejected his people and allowed them to be conquered. Judah was guilty of the same sins but was allowed to run on for a while longer.

Chapter 17 ends with a polemicized, if not legendary, description of the origin of the Samaritans who, in later times, would would be reviled by the Jewish people. It seems that the pagans who were resettled in Israel were being eaten by lions because they didn't know how to honor Israel's God. A priest from among the Israelite exiles is sent back to his homeland to teach them to worship YHWH. He wasn't very successful. The pagans simply added YHWH worship to their own abominable practices.


So these nations worshiped the LORD, but also served their carved images; to this day their children and their children's children continue to do as their ancestors did. (2 Kings 17:41).

Ancient Israel is no more. It's ten tribes are forever lost.