THE YEAR OF BLOGGING BIBLICALLY: DAY 124 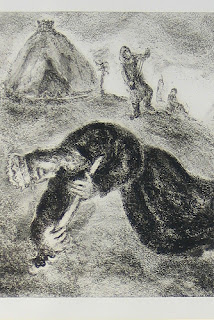 1 Chronicles 9 brings it home. It begins with a list of the Judahites who returned from Babylonian exile to resettle Judah and the city of Jerusalem. The text pays particular attention to temple functionaries:  the priests, Levites, and gatekeepers.

Next follows a Genealogy of King Saul repeated, with some variations, from the previous chapter. It introduces Saul whose story is told in Chapter 10.

Actually, very little of Saul's story is told in chapter 10. Basically he dies on a battlefield by his own hand. The same story was told in 1 Samuel 31. The Chronicler is not much interested in Saul. He dies because of his unfaithfulness. He mostly serves as a contrast to David whose (much sanitized) story begins in chapter 11.

David becomes king, captures Jerusalem, and makes Joab his general. YHWH, as we now from our reading of 2 Samuel, loves David.

The list of David's "mighty men" is largely repeated from 2 Samuel 23 though there are some variations. All the chieftains and "all of Israel" love David. 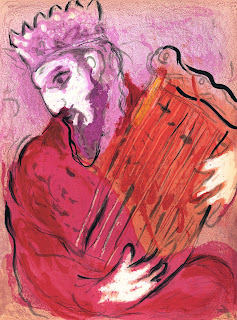