THE YEAR OF BLOGGING BIBLICALLY: DAY 128

This is new. After David's census and the ensuing plague in Samuel-Kings, there is a string of stories about David's dysfunctional family and the struggle for succession to David's throne. We get none of that in 1 Chronicles. Instead, the Chronicler tells us that David, who cannot build YHWH's temple on account of all the blood he has shed, begins to lay in supplies, huge amounts of gold, silver, bronze, iron, and cedar, so that his son Solomon can do the job.In 1 Kings 5 we read that Solomon procured his own supplies.

For all the Chronicler tells us, Solomon's ascendancy to the throne is smooth and uncontested.

David's speech to Solomon in 1 Chronicles 22 is reminiscent of, maybe modeled on, Moses' instructions to Aaron in Deuteronomy 31.

In chapter 23 David, now grown old, reorganizes the Levites. Since the ark is now residing permanently in Jerusalem, the Levites won't have to carry it, or the tabernacle, around anymore.

In chapter 24 David reorganizes the priests. 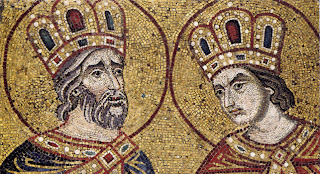