THE YEAR OF BLOGGING BIBLICALLY: DAY 134 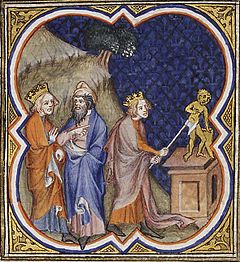 In 1 Kings 15, eight verses were dedicated to King Abijam whose mother was Maacah, the daughter of Abishalom. Basically, he was one of those bad kings who disobeyed YHWH. For the sake of Abijam's great-grandfather, David, YHWH allowed the dynasty to continue.

The Chronicler seems very interested in redeeming Abijam's reputation, even to the point of giving him a new name: Abijah. One letter makes a world of difference.

The Chronicler also renames Abijam's mother. The Hebrew text of 2 Chronicles calls her "Micaiah" the daughter of "Uriel of Gibeah." Not surprisingly the NIV obscures this little difference by calling the woman "Maakah" in both books though the discrepancy concerning her father's name is preserved. Maacah/Micaiah creates problems of her own. In first Kings Maacah, daughter of Abishalom is said to be the mother of both Abijam and his son Asa. 2 Chronicles actually resolves this problem by making Abijah's mother Micaiah, daughter of Uriel and calling Asa's mother "Maacah."

At any rate, the Chronicler is so keen on the Davidic kingship that he makes Abijah out to be a good and faithful king. In a battle against the rebellious northern king Jeroboam, Abijah, surrounded and outnumbered, first preaches a sermon to the enemy troops about faithfulness to YHWH and the legitimacy of the Davidic dynasty. Then, with YHWH's help, he routs them thoroughly. The armies are impossibly large. A note in the Harper Collins Study Bible points out that the number of northern casualties is 100,000 more than the total number of U.S. casualties in the entire Second World War.

On the other hand a footnote in the Apologetics Study Bible suggests that, although the archeological record denies the possibility of such large armies, it is possible that archeology is wrong and the Bible is right.

I'll let you decide which is more likely.

Because Asa is faithful to YHWH, his reign is peaceful. He takes advantage of the peace engage in some building projects. There is a period of war when Zerah the Cushite/Ethiopian/Nubian (take your pick, they're all the same) attacks. The invasion is repelled with YHWH's help.

It might be truer to the Chronicler's theology to say that YHWH repelled the invasion with Asa's help.

In 2 Chronicles 15 we meet a prophet named Azariah, son of Oded. He is mentioned only here in the Scriptures. On the basis of Azariah's oracle, Asa cleans up worship in Judah. He even deposes his mother and tears down his her Asherah pole, as was also reported in 1 Kings 15:13.

Chapter 16 tells how Baasha, king of Israel threatens Asa by fortifying the city of Ramah (cf. 1 Kings 15:17 ff.). Asa seeks an alliance with Ben-hadad of Aram. Asa gives the foreign king gifts from the temple treasury. In another passage without parallel, Asa is confronted by a prophet named Hananiah. Hananiah charges the king with failing to trust in YHWH. Though Baasha leaves off the fortification of Ramah, Asa falls out of favor. In anger Asa abuses Hananiah and others. His early faithfulness is now faithlessness. In his last years the king suffers from an unspecified foot disease. He seeks relief from physcians, not YWHW: another failure of faith. Asa dies.

The practice of medicine in ancient times was a far cry from modern scientific medicine. I read another news report recently about parents who were facing criminal charges because their child died needlessly when, for religious reasons, they refused to seek medical attention for a treatable ailment. It is one man's opinion, but these parents deserve to be prosecuted and, if guilty, should feel the full weight of the law.