THE YEAR OF BLOGGING BIBLICALLY: DAY 140 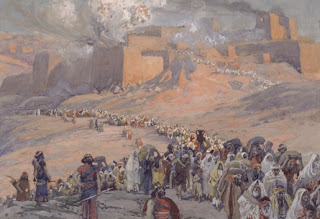 King Josiah, so much the hero of 2 Kings, takes a backseat to Hezekiah in Chronicles. His reforms mostly echo those of the earlier monarch. Josiah's Passover is on time (Hezekiah's was a month late) and lasts only one week (Hezekiah's ran two). But the sheer number of lambs, goats, and cattle sacrificed is staggering.

Were the Passover lambs roasted or boiled? The translations mostly say "roasted" though the Hebrew literally says "boiled with fire." Exodus 12:8-9 said the lamb should be roasted. Deuteronomy 16:7 said boil it.

Personally, I like my lamb chops grilled. With mint jelly.

Josiah's death in battle against king Necho of Egypt is given fuller treatment than it received in 2 Kings 23. Necho serves as a prophet of God. He isn't interested in a war with Josiah. Josiah goes into battle in disguise and is mortally wounded. He dies in Jerusalem and Jeremiah composes laments for him. Jeremiah had a reputation for that sort of thing.

Josiah is followed by Jehoahaz who reigns only 3 months. Before being deposed by Necho. Necho puts Jehoahaz's brother Eliakim on the throne. As a show of power Necho changes Ekiakm's name to Jehoakim.

Jehoakim is evil. He rules for 11 years and is imprisoned in Babylon.

He is followed by brother Jehoiachin, another evil king. He rules 3 months an 10 days and is also taken to Babylon.

Then comes Zedekiah, Jehoiachin's brother in the Hebrew text. The NIV "helpfully" corrects that to "uncle" harmonizing the account with 2 Kings 24:17.

Jerusalem falls.  Its people are taken into exile. The land is given 70 years of rest according to an oracle of Jeremiah (Jeremiah 25:11-12). Cyrus of Persia declares that the deported Israelites may return to their homes. The last verses of 2 Chronicles are nearly identical to the opening verses of Ezra.

1-2 Chronicles got off to a weak start (one man's opinion). These books provide an alternative history or, more accurately a differently nuanced theological interpretation of history, to the one found in 1-2 Kings. The Chronicler is all about the legitimacy of the Davidic dynasty and of the Jerusalem temple. He shows a concern for the unity of "all Israel"--north and south. Like the Deuteronomist, the Chronicler holds that idolatry brings punishment; faithfulness to YHWH is rewarded with prosperity and security.

Next we begin reading  Ezra and Nehemiah which tell the story of the exiles who returned to Jerusalem. I find these books by turns inspiring and distasteful. The returnees heroically rebuild their city with a trowel in one hand and a sword in the other but they also show a xenophobic concern for ethnic purity.