THE YEAR OF BLOGGING BIBLICALLY: DAY 139 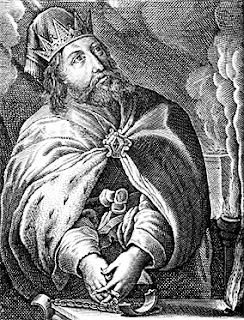 The Chronicler's portrait of king Hezekiah differs radically from the one we read in 2 Kings. There Hezekiah's failings and weaknesses were manifest. He made foreign alliances. He surrendered and paid tribute to Sennecharib. He stripped the gold from the temple to pay the Assyrian king. The Chronicler mentions none of these things. And where, in 2 Kings, YHWH spoke to Hezekiah through the prophet Isaiah, in Chronicles, Hezekiah is the direct recipient of divine communications.

But back to the story at hand: When Sennecharib of Assyria advances on Jerusalem, Hezekiah plans to resist him and gives an encouraging speech to the people of the city. The Assyrians lay seige to Jerusalem but when Hezekiah and Isaiah pray, YHWH intervenes, smiting the Assyrians and sending Sennecharib scampering home where his own sons kill him in the temple of his god.

Hezekiah's preparations included damming up the enemy's water supply. He provided water for the city by means of a tunnel which may still exist in Jerusalem today. An article in the most recent issue of Biblical Archeology says that recent scholars doubt the tunnel in question was actually built by Hezekiah.

The Chronicler's account of Hezekiah's illness and recovery are abbreviated from the parallel story in 2 Kings. Hezekiah gets sick, gets healed, and then gets proud. YHWH gets angry but, when Hezekiah and the citizens of Jerusalem humble themselves, God calms down. The pending wrath is delayed for someone else's reign.

Chapter 33 tells the story of the reign of Hezekiah's son, Manasseh. The Chronicler agrees with 2 Kings that Manasseh is an evil king. He engages in all sorts of idolatry, even building altars to other gods in the temple of YHWH.

For all of these offenses, YHWH sends the Assyrian army to conquer Jerusalem. Manasseh is taken captive. Hereafter the Chronicler's account diverges from 2 Kings. In captivity, Manasseh repents. YHWH sends him back to Judah. He fortifies the city. The Judahites, on the other hand, are unrepentant and persist in their idolatry.

After Manasseh's death, his son Amon ascends to the throne. He's as bad as his dad was and thoroughly unrepentant. To no one's surprise he is killed in a palace intrigue.

In Chapter 34 Josiah follows Amon. The Chronicler likes Josiah, but 2 Kings was nuts about him. Josiah purges Judah, and those parts of the northern kingdom that remain, of idols. He begins repair work on the temple, in the midst of which Hilkiah, the priest, discovers the book of the Law. (The sequence of events differs from 2 Kings).

When the prophet Huldah is consulted she announces that YHWH has plans for Jerusalem to be destroyed but, because Josiah is a good guy, it will wait for another king.