THE YEAR OF BLOGGING BIBLICALLY: DAY 135 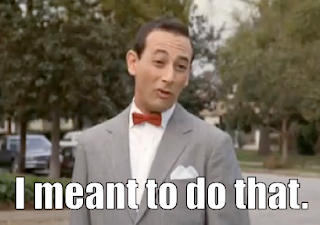 Can you tell that I've had a lot on my mind? The last post was supposed to cover 2 Chronicles 13-17 but I only got through chapter 16. It was totally an oversight on my part. It actually works out nicely, however. Chapter 17 is the beginning of the story of King Jehoshaphat, a story which continues through chapter 20. So because of my mistake I can consider Jehoshaphat's story as a whole in this post.

Chapter 17 begins and ends with descriptions of Jehoshaphat's military strength. In 17:1-6. he stations troops in Judah's fortified cities. In verses 12 ff. his troops are tallied. They number 1,600,000. It's no wonder the neighbors won't fight with Jehoshaphat (v. 10) and the Philistines and Arabs send tribute to Judah.

Jehoshaphat isn't all about the armies, though. He also sends teachers throughout Judah, apparently to instruct them in the ways of YHWH.

In chapter 18, Jehoshaphat makes a marriage alliance with Ahab of Israel. He goes down to Samaria to meet with Ahab. (One always goes up to Jerusalem and down from it). Ahab plays the devil and seduces Jehoshaphat to go with him to war at Ramoth-gilead (verse 2). Most of this chapter is taken verbatim from 2 Kings 22. The Chronicler omits some of the gory details of Ahab's battlefield death. He just isn't much interested in the northern kings. He also makes some small editorial additions. In verse 31, YHWH seduces (the same Hebrew verb as in verse 2) Jehoshaphat's pursuers away from him.

In chapter 19, the prophet Hananiah's son Jehu, a prophet in his own right, confronts Jehoshaphat over his alliance with the wicked Ahab. Still, Jehoshaphat isn't all bad. He did get rid of those pesky sacred poles.

The rest of chapter 19 is taken up with a description of Jehoshaphat's judicial reforms. He appoints judges for the cities of Judah and for Jerusalem. He charges them strictly to be honest, fair, and just in the judgments.

In chapter 20 Jehoshaphat faces an invasion from the east. He orders a fast and offers a prayer reminiscent of Solomon's prayer in chapter 6. A prophet named Jahaziel speaks an oracle with echoes of Deuteronomy 20. YHWH will do all the fighting. Judah need only watch. So, next day, the Judahites sing and praise while YHWH turns the invading armies against one another. YHWH is good at that sort of thing (see Judges 7 and 1 Samuel 14). The invading armies are utterly destroyed. Judah cleans up the spoils of war, which are considerable. No one else dares to invade Judah. The rest of Jehoshaphat's reign is peaceful.

Isn't that the way things go in Chronicles? YHWH rewards those who are faithful to him. 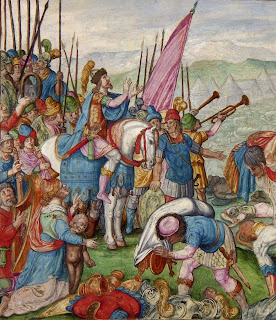 The Chronicler disapproves of Jehoshaphat's alliances with the kings of Israel.

All-in-all, Jehoshaphat's reign is assessed positively. If only he gotten rid of those high places (20:30). Except I thought he did (17:6). I'm sure the Chronicler meant to do that.