THE YEAR OF BLOGGING BIBLICALLY: DAY 133 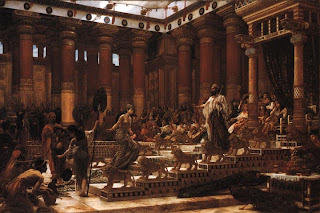 In 2 Chronicles 9 the Queen of Sheba visits Solomon. We read about this previously in 1 Kings 10. Then Solomon enters into a trade venture with Huram. In 1 Kings 9 Solomon provided the ships for the venture. Here it is Huram. Verses 13-28 give an accounting of Solomon's vast wealth. I love the detail that "silver was accounted of no worth" during Solomon's reign. In verses 29-30 we are told of Solomon's death.

Just as the Chronicler omitted any reference to David's dalliance with Bathsheba (and participation in her husband's death) so here we learn nothing of Solomon's 1000 wives and concubines or the idolatry into which they led him.

An odd thing to note: in 1 Kings 10 Hiram and Solomon import algum wood. In 2 Chronicles 9 it is called almug wood. No matter how it is spelled, no one seems quite sure what kind of wood this was.

Chapter 10 tells of Rehoboam's ascent to the throne. Although the Chronicler has told us twice that Solomon did not impose forced labor on Israel (2 Chronicles 2:17-18, 8:7-10) Rehoboam, using the same crude sexual boast that we read in 1 Kings 12, insists that he will increase their burden. The northern tribes rebel. Jeroboam, of whom we have heard nothing previously (in 1 Kings 11 we read his backstory) becomes ruler of the northern kingdom.

The Chronicler, loyal to the Davidic throne, shows little interest in the northern kingdom. He mentions it only when necessary.

In chapter 11 Rehoboam does not go to war against Jeroboam. Rehoboam does fortify the cities of Judah just in case. All this we knew from 1 Kings. Now the Chronicler gives us some new information: Levites from the north come streaming into Jerusalem. Jeroboam has put them out of business by appointing his own priests to serve the "goats" (per NIV) or "goat demons" (NRSV) and calves that he made. Apostasy is rampant up north.

Rehoboam is faithful and prosperous for a while. He has 18 wives and 60 concubines. Among them he loves Maacah best. Her child, Abijah, though not the oldest of Rehoboam's sons, will assume the throne.

In chapter 12 Rehoboam proves unfaithful. As a result Shishak, king of Egypt, invades Judah. When Rehoboam and company repent, YHWH grants partial deliverance. Judah will not be destroyed. Instead it will be a vassal state to Egypt. Shishak takes the gold shields that Solomon made as tribute. Rehoboam replaces them with bronze shields. Judah is not so prosperous as it once was. 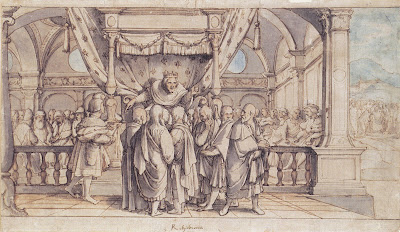