THE YEAR OF BLOGGING BIBLICALLY: DAY 141 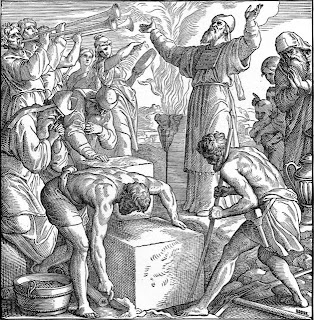 If I understand history correctly, the Assyrians who conquered Israel, the northern kingdom, were particularly harsh in their treatment of defeated peoples. They deported them, scattered them, and did not allow them to maintain their unique ethnic identity. The 10 northern tribes were "lost" to history.

Of course, not all of the Israelites were taken into exile. Only the elite, the wealthy, the powerful, the priests, and princes were deported. The poor and powerless were left to shift for themselves among the foreigners who were relocated into their territory. Some of the remnant intermingled, intermarried, and perhaps to some extent syncretized with the new population. These became the Samaritans. Some of the northern remnant went south to Judah as refugees.

The Babylonians, who later conquered Judah, were arguably kinder than the Assyrians. They, too, deported the wealthy and powerful, but they allowed the exiles to settle in communities and to maintain their unique ethnic traditions. It was the Judahites living in Babylon who most likely began to collect their stories, writings, and songs into a proto-canon. It was in Babylon, as the Judahites tried to preserve their identity, that rabbinic Judaism had its earliest expressions.

Again not all of the people were taken into exile. The wealthy and powerful went to Babylon. The poor stayed behind. Some went as refugees to Egypt.

After the Babylonians a new empire, the Persian empire, arose. King Cyrus of Persia seems to have believed that a happy empire is a peaceful empire. In 539 BCE he issued an edict allowing exiled peoples to return to their homes. Cyrus is kindly remembered in the Hebrew Bible. He is even called the "messiah."

Not everyone returned from exile. After 60 or 70 years of exile, there were ethnic Israelites who had never seen the homeland. Some had no doubt put down roots, married, become prosperous. They had no reason to go back to a place they'd never seen. I believe this is the beginning of the Diaspora.

The books of Ezra and Nehemiah, which originally circulated as a single work, is only interested in the exiles who have returned. Those who never left the land are either ignored, or in the case of the Samaritans, disdained. Those who stayed behind in Babylon receive no notice.

I wonder whether the edict recorded in Ezra 1:2-4 in any way resembles the actual historical document. On the one hand, it seems odd that Cyrus would describe himself as a subject of YHWH. On the other hand, if the account here is accurate, he might have been playing to his audience.

Anyway, the great narrative of the Old Testament spans from creation to the return from exile. Every now and then in this story, when things get really bad, YHWH reboots the system. Noah's flood was a reboot. The call of Abraham, the Exodus and settlement of Canaan, and the rise of King David were reboots. Now, the exiles' return is a reboot. Israel, home again, can start over.

But there is hard work ahead.

First an altar to YHWH is built on the site of the old altar. Worship and sacrifices are re-established. A foundation is laid for the temple. The old folks, who had seen the previous temple weep. The young shout with joy.