THE YEAR OF BLOGGING BIBLICALLY: DAY 146 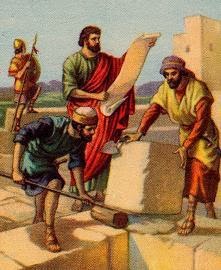 Nehemiah puts his brother Hanani, "along with Hananiah," in charge of Jerusalem. This is a little like saying that he put his brother Bob, along with Robert, in charge. Hanani and Hannaiah are forms of the same name. Most likely they are the same person and the repitition is an ancient transcriptional error. This is why biblical inerrantists insist that inerrancy only applies to the original manuscripts, the "autographs." It is also why a doctrine of inerrancy is useless. The autographs no longer exist. We do not have any inerrant Bibles.

In the case of Ezra/Nehemiah, books that are so clearly compiled from other works, one might ask whether inerrancy extends only to the compiler's work or whether the sources were also inerrant.

Or, one might opt for a more reasonable doctrine of inspiration. Just sayin'.

Anyway, YHWH puts it into Nehemiah's head to look into the records and see who the original returnees to Jerusalem were. He didn't have to look any further than the second chapter of Ezra (or the source behind it) as most of Nehemiah 7 is a direct copy of that chapter.

I have pointed out before that chapter and verse divisions are not original to the biblical texts. Sometimes they were inserted in awkward spots. Chapter 7 ends in midsentence, with a comma in the NIV, an em dash in the NRSV.

Punctuation was also not original to the texts.