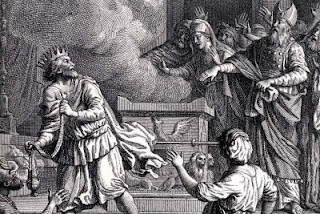 A pattern was established in the story of King Joash (2 Chronicles 24). He began his reign faithful to YHWH and was rewarded with prosperity and success. Later in his reign, Joash worshiped other gods, bringing failure and death. The pattern, reflecting the Chronicler's theology, repeats itself in Joash's son, Amaziah, and his grandson, Uzziah.

Chapter 25 tells the story of Amaziah. His initial faithfulness is shown in the fact that, though he executes men who assassinated his father, he spares their children in keeping with Deuteronomy 24:16. Amaziah flirts with faithlessness when he supplements his army with mercenaries from Israel. An anonymous prophet warns of YHWH's displeasure and Amaziah sends the northerners home, with pay. They aren't happy anyway and vent there anger on some of Judah's cities while Amaziah is off fighting against Seir.

Amaziah is victorious and captures Seir's gods. He goes full tilt boogie into idolatry. Another anonymous prophet tries to warn Amaziah but the king won't listen this time.

In retaliation for the Israelite destruction of Judah's cities, Amaziah declares war againt Israel. King Jehu of Israel replies with a parable: when a puny thornbush seeks an alliance with a mighty cedar, the thornbush is trampled by a wild animal. There can be little doubt about who is the thornbush in this story. The kings engage in war. Amaziah is defeated and captured. The Israelites confiscate the temple's treasures and loot the king's treasuries. Later Amaziah is assassinated. It doesn't pay to play with idols.

In chapter 26 Uzziah succeeds Amaziah. In 2 Kings 15 Uzziah was known as Azariah. I'm happy to report that the NIV does not harmonize these names. The name Uzziah is useful inasmuch as it prevents confusion with the priest Azariah who confronts the king.

Like his father and grandfather Uzziah starts out faithful and is successful. But success goes to his head and Uzziah takes it upon himself to offer incense in the temple, a job reserved for the priests. One must wonder whether Uzziah ever heard of Nadab and Abihu (Leviticus 10). Unauthorized incense offerings are not a good idea. The priest Azariah and 80 other priests confront the king as he stands at the altar with a thurible in his hand. YHWH gives Uzziah a good case of leprosy. The king flees from the temple.

Uzziah's leprosy was mentioned in 2 Kings 15 but the cause for it is found only in Chronicles.

Chapter 27 is a short one. The story of King Jotham is told in 9 verses. He does right. He stays out of the temple. His reign is successful. And that, apparently, is all we need to know.