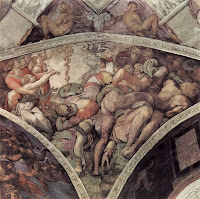 IS THE BIBLE A KIND OF RORSHACH TEST?

Jonathan Dudley wrote an interesting editorial piece titled What the Bible Says Depends on Where You’re From on Huffington Post yesterday. In it, he suggests that the Bible is a sort of Rorschach test, that what we read out of the Scriptures depends upon the ideology that we bring to it.

We could run through the list of controversial issues -- abortion, war, pre-marital sex, slavery -- and find that on both sides each debate, a host of passages can be marshaled both for and against each position, creating mutually contradictory portraits of "what the Bible really says."

It's tempting to conclude that one side of these debates is simply biased while the other side (usually our side) is not.

But it's also wrong.


Dudley’s concern is primarily with the way that the Bible is used in political discourse, and so he concludes:

When a community claims they can't help but oppose homosexuality because the Bible requires them to do so, or that Jesus would support a liberal economic system, or that if you really read the Bible carefully you should end up supporting Party X, they're showing naivete. What the Bible "requires" depends on the beliefs one brings to it.


I hope these quotes have whetted your appetite to read the entire article. It’s worth the few minutes that it will take.

There are other possible conclusions to be drawn from Dudley’s contention that we do not and, in fact, cannot read the Bible objectively.

For one, I think this bolsters my contention that “biblical” and “unbiblical” are not helpful terms. They do not foster dialogue or promote understanding. In fact, these words are usually used to end conversation. I might be better to say “I understand the Bible to say....”

For another, it might suggest that using the Bible as a verse mine for proof-texts, or as a kind of divine reference book, is mistaken. Rather than taking the Bible as the direct “Word of God” it might be better to read it as a conversation with and about God by its various writers. What is more, we might see the Bible as an invitation to join in that conversation.

Of course, these conclusions may just reflect the ideology that I bring to the Scriptures.

What do you think? Is Dudley right? What other conclusions might be drawn from his argument that what we read out of the Bible is what we bring to it?


Sometimes the most profitable time I spend in the Bible is wrestling with passages that do not affirm my ideology. As I write these words, I’m still struggling with tomorrow’s sermon text, Numbers 21:4-9, in which we read: “So the LORD sent poisonous snakes among the people and they bit the people. Many of the Israelites died.” (v. 6 CEB). I took Michelangelo’s Sistine Chapel illustration of the passage from wiki.