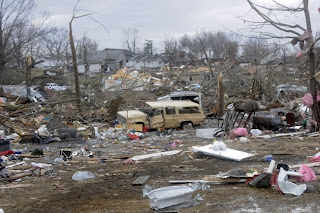 Some who were present on that occasion told Jesus about the Galileans whom Pilate had killed while they were offering sacrifices. He replied, “Do you think the suffering of these Galileans proves that they were more sinful than all the other Galileans? No, I tell you, but unless you change your hearts and lives, you will die just as they did.” Luke 13:1-3


When a devastating earthquake struck Haiti on January 12, 2010, Pat Robertson was quick to proclaim that it was a sign of God’s wrath because the Haitians had made a “pact with the devil.” This was really no surprise, as Robertson regularly attributes natural disasters to God’s anger over what Robertson perceives as sins. In 2005, he stated that Hurricane Katrina was God’s judgment on “legalized abortion.”

On August 19, 2009, a freak tornado struck Minneapolis during the ELCA’s Churchwide Assembly. Celebrity pastor John Piper was quick to say that the storm was a “gentle but firm warning” to the ELCA which voted in that assembly to approve the ordination of pastors in committed same-sex relationships.

Yesterday (February 29, 2012) a powerful tornado ripped through the town of Harrisburg in my home state of Illinois. Six people were killed, hundreds injured. Pat Robertson and John Piper have been oddly silent. Why is that?

It is easy to define those who disagree with us as other. “They are not like us.” From there, it is a short step to demonizing the other. “They are wrong. They are sinners. They are bad people.” Then, when disaster hits, it’s easy to blame the victims. “They deserved it. It is God’s judgment.”

“What about those twelve people who were killed when the tower of Siloam fell on them? Do you think that they were more guilty of wrongdoing than everyone else who lives in Jerusalem? No, I tell you, but unless you change your hearts and lives, you will die just as they did.” Luke 13:4-5

I strongly suspect that the population of Harrisburg includes close to the average percentage of homosexuals. And adulterers. And murderers. And drug abusers. And...you get the idea. It is convenient to call a disaster “God’s wrath” when it strikes someone we think is a sinner. It is inconvenient to call it judgment when it hits someone who is just like us.

This does not mean that there are no lessons to be learned from hurricanes, earthquakes and tornados.

I believe that the message of Jesus can be summarized as: Trust God and take care of one another. (The message about Jesus is something else). Jesus used Pilate’s murder of some Galilean pilgrims and the collapse of a tower at Siloam as a call for all people to repent--to “change your hearts and lives.” Natural disasters (and some unnatural ones) are powerful reminders that life is short, precious and fragile. They force us to face our mortality and sinfulness. They call us to repentance and to trust in God.

They also remind us that we need to take care of one another. Pray for the people of Harrisburg, and, if you can spare a few dollars, make a contribution to a reputable relief agency.

I found the photograph of devastation in Harrisburg at this website.  Lutheran Disaster Response is one reputable relief agency that could use your support. Bible quotes are from the Common English Bible.
Posted by Brant Clements at 7:30 PM