Cyrus Scofield Was A Scoundrel

BESIDES THAT, HE WAS WRONG 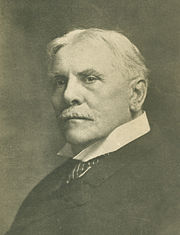 I did some reading about Cyrus Scofield (1843–1921) recently. If that name means nothing to you, then you are probably not a premillennial dispensationalist.

If the words “premillennial dispensationalist” mean nothing to you, well, let me explain...

Premilliennial dispensationalism (hereafter “PD”) is a scheme of biblical interpretation that divides history into a series of time periods called “dispensations.” In each dispensation, God relates to humanity in a different way. Currently, according to PD, we are living in the penultimate dispensation. Soon, Jesus will rapture all true believers out of the world before a period of tribulation culminating in the Battle of Armegeddon, after which Jesus will return to rule on earth for a millennium.

PD is predicated on the idea that the Bible contains detailed, if veiled, predictions of future events. Recent proponents of PD include Hal Lindsey, author of the 1970s bestseller, The Late Great Planet Earth, and Jerry Jenkins and Tim LaHaye, who wrote the Left Behind books. Arguably the most influential champion of PD was Cyrus I. Scofield.

Scofield was an intelligent, articulate, and charismatic preacher. He produced a correspondence course in Bible study. He served as pastor to the famous evangelist Dwight L. Moody and preached at that man's funeral. He was a contributor to The Fundamentals, a series of twelve publications produced between 1910 and 1915 which gave Christian Fundamentalism its name. The Fundamentals was intended to defend an allegedly pure (but actually unhistorical) Christian faith against the inroads of Modernism, Darwinian evolution, and scholarly biblical criticism.

Scofield's most notable achievement was no doubt the Scofield Reference Bible (SRB), published by Oxford University Press (!) in 1909, revised in 1917, and again in 1967. The SRB remains in publication today.

The SRB was a King James Version Bible with introductory essays to its books and sections, extensive footnotes interpreting the text according to a premillennial dispensationalist scheme, and a system of marginal cross references. With the SRB Scofield virtually invented the modern study Bible. The SRB popularized premillennial dispensationalism and probably convinced many readers that PD is the correct and even self-evident way to interpret the Scriptures.

From what I've read, it appears that Cyrus Scofield was something of a scoundrel.

Before his experience of Christian conversion, Scofield had failed as a lawyer, been involved in a political scandal, partook of rather too much strong drink, and been accused of defrauding his fellow citizens of their money. Of course, what happened after his conversion is what matters. In that period of his life, he abandoned a wife and two daughters, misrepresented his war record to his own benefit, and conferred upon himself the unearned title “Doctor of Divinity.”

I have to admit that I took a sort of gossipy pleasure in reading the salacious details of Scofield's life. At the same time, it must be said that calling Scofield a scoundrel does not undermine the ideas he promoted. To claim otherwise would be to employ the logical fallacy of argumentum ad hominem, that is attacking someone's character rather than engaging their ideas.

So. let the system of interpretation promoted by the SRB stand or fall on its own merits.

Premillenial dispensationalism has infiltrated popular culture in many ways, but it is a recent innovation in biblical interpretation. It has neither history nor tradition on its side. Biblical inerrancy, a foundation of PD, doesn't hold up to an honest reading of Scripture. The Bible simply contains too many evident errors of fact and internal contradictions. Darwinian evolution and modern historical criticism have the weight of fact and reason on their side. In short, the entire dispensationalist and Fundamentalist enterprise, embodied in the apparatus of the SRB, is built upon a foundation of sand.

Whether Cyrus Scofield was a scoundrel or a saint does not really matter. His ideas were mistaken. Because he was bright, articulate, and effective in promoting those ideas, they have now taken deep root in the popular imagination. I think that many people now mistake Scofield's kind of Christianity with historic orthodoxy.

And that's not good for the faith.

The photograph of Cyrus Scofield, c. 1920, came from wiki.

Posted by Brant Clements at 1:57 PM