The Strange Case of the Baptist Electrician 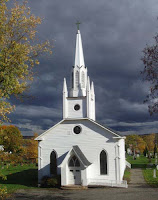 It was a Wednesday afternoon. The electrician was just finishing up the job I’d hired him to do. I caught him glancing at his watch.

“Do you need to be somewhere?” I asked.

He answered, “I don’t want to miss church tonight.”

With the deductive prowess of a latter-day Sherlock Holmes, I put the facts together: Wednesday. Church. Not Lent.

“You must be a Baptist,” I concluded.

“Yep,” he smiled and told me which congregation he called his church home.

I was familiar with it and I knew that their theology was far from mine. It wasn’t just the believers’ Baptism thing, either. They were King James Bible-thumping, fundamentalistic, straight-and-narrow, sawdust-trail-walking, hell’s-full-of-liberals-abortionists-and-gays, agree-with-us-or-be-damned Christians. Strong on Law and weak on Gospel, in my opinion they represented everything that is wrong with Christianity.

But I didn’t say so.

“That church saved my life,” the electrician said. He meant it literally and it was probably objectively true. A few years earlier he had been on a path of self-destruction. With no internal controls on his behavior, I think he needed the external control that this legalistic church provided.

I think that God may very well have been at work in that church with all of its bad theology.

Sometimes I wish God wouldn't do things like that.


My plans aren’t your plans,
nor are your ways my ways,
says the LORD .
Just as the heavens
are higher than the earth,
so are my ways
higher than your ways,
and my plans than your plans. (Isaiah 55:8-9 CEB)

Posted by Brant Clements at 9:28 PM