PART 7 IN A SERIES ON TRANSLATION 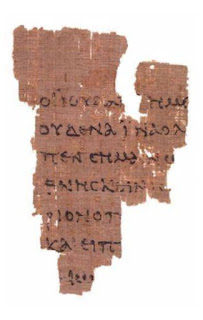 We do not have the original copies, the “autographs” as scholars call them, of any of the books of the Bible. They are lost to time and history, probably worn out and discarded long ago. If they exist at all anymore, it is most likely as scraps and fragments which, if they were found today, probably could not be identified as the originals.

Copyists make errors. Try copying a paragraph or two out of a book sometime and see how you do. Now imagine someone copying your copy. They would probably duplicate your errors--or try to correct them--and add new errors of their own. With each fresh copy, discrepancies multiply and variant readings proliferate.

There are literally more variant readings than there are words in the entire New Testament. How can we possibly know what the originals said?

The situation is not so hopeless as it may sound. For one thing, most of the variants are quite minor and do not affect the meaning of the text. For another, there are scholars called text critics who catalog, collate, and compare all the known New Testament manuscripts to determine the most likely original reading from among the variants.

Text critics base their judgments on several criteria. Among them:

In general, older texts are preferred because they are closer in time to the original and there would have been less opportunity for mistakes to be made and reproduced.

Certain texts are considered more reliable than others because they show signs of being produced by careful, trained scribes.

Difficult readings are more likely to be original as scribes have a tendency to smooth out difficulties.

Shorter readings are also preferred as scribes are more likely to add words deliberately than to omit them.


Text critics have also described all sorts of mistakes that copyists are liable to make, skipping or repeating words or lines, mistaking words that sound alike (think of how often the English words “there,” “they’re” and “their” are interposed), etc.

Using criteria like these, text critics have produced what they believe to be the best possible approximation of the original texts of the New Testament.

From the 16th through the 19th centuries, Erasmus' Textus Receptus was the standard text underlying most translations of the New Testament. In 1881, British scholars Brooke Foss Westcott and Fenton John Anthony Hort published The New Testament in the Original Greek, the first of the modern critical editions. Today the standard critical texts are the 4 th edition of the United Bible Societies' Greek New Testament(UBS4) and the Nestle Aland Novum Testamentum Graece. These two have identical texts (and are actually quite close to Westcott and Hort's work) but they each have a different critical apparatus (that is, a set of scholarly notes). The UBS and NA texts are the basis for most modern translations. Some translators will occasionally disagree with the critical editions and choose a variant reading. In such cases, you will usually find a footnote in the translation.

Although I think that the critical texts are the best basis for a translation, not everyone would agree. Orthodox Bibles (which base their Old Testament on the Septuagint) use a majority text—that is, a text that uses the most commonly occuring readings, rather than the most likely variants—that was authorized in 1912 by the Patriarchate of Constantinople. The Orthodox text is close, but by no means identical to the Textus Receptus. There are also King James Version Onlyists who, in defiance of reason, insist that the Textus Receptus is the only proper basis for a translation of the New Testament (and usually that the King James Version is the only proper translation). 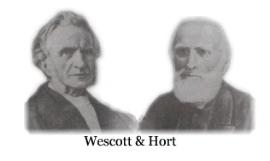 Illustrating this post are an image of P52, the oldest currently known manuscript of a New Testament text, and a picture of Westcott and Hort. Both pictures were found at wikipedia.com.