If You Give A Martian A Bible


WHAT WOULD THEY THINK? 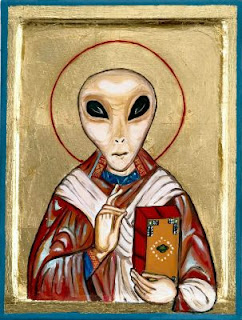 Dr. Mary Joan Winn Leith wrote the Biblical Views column for the March/April 2012 issue of Biblical Archeology Review. In her essay, titled “The Bible Divide”, she notes that “Many people are unaware that Religious Studies and Theology are not synonymous.” As she defines the difference, “...a Theologian studies her own religion as a believer—as a Jew or a Christian, for example—allied with faith and authority.” Religious Studies, on the other hand, takes a view from the outside. “I tell my students.” Leith writes, “to imagine scholars of Religion as Martians, newly landed on earth with no preconceived notions about religion.”

This led me to ponder: If a Martian—one who is human in temperament, emotional makeup and intelligence, but unfamiliar with Christian culture—were to read the Bible, what conclusions might they draw? For our purposes, the Bible should be a text edition and not a study Bible. It may have text critical footnotes, but no explanatory or interpretive notes, and no introductory essays.

Would such a Martian, on first reading, take chapter one of Genesis as a literal account of the origins of the cosmos? I would think so. Without context to indicate that the story of a 6-day creation is meant to be anything else, it appears to be a factual account. It is unlikely, however, that our Martian would accept this account as accurate. There is too much in it that is contradicted by physical evidence.

On reading the second chapter of Genesis, the Martian would find a second account of creation quite unlike the first. Now, here's a puzzle. How to account for the differences? Should the two stories be reconciled in some way? Is either of them meant to be taken literally? Or do they belong to a literary genre other than factual reportage?

I am confident that, whatever conclusions our imaginary Martian might make, by the time they reached the book of Revelation, they would not think the Bible was inerrant, or that it contained no internal contradictions. I am likewise confident that our extra-terrestrial buddy would not derive a doctrine of premillenial dispensationalism or even (and as a Nicene Christian it chagrins me to say this) a doctrine of the Trinity. Inerrancy is an assumption. The Trinity is an interpretation. Premillenial dispensationalism is a framework imposed on the Scriptures.

Would a Martian, reading the Bible through, be moved to adopt the Christian faith? It's possible, though I don't think it likely. The books that we Christians read as Scripture were written by and for believers. They are intended to shore up faith, not to cause conversions. For our Martian to come to faith, they would probably need someone to interpret the Bible for them, as Philip interpreted Isaiah for the Ethiopian eunuch (Acts 8:26 ff.). Faith lives in community, not in a book.

Generation upon generation of believers have found the Word of God in the Bible. Christians don't read their Scriptures as a Martian would. But taking an objective look at the Bible is a valuable exercise. It might keep us from making silly assumptions or drawing untenable conclusions. Reading the Bible like a Martian may not lead an unbeliever to faith, but it can certainly inform the faith of one who believes.


Another article well worth reading in the March/April BAR is Dr. Amy-Jill Levine's piece What Jews (and Christians too) Should Know About the New Testament.